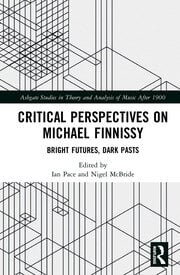 The composer and pianist Michael Finnissy (b. 1946) is an unmistakeable presence in the British and international new music scene, both for his immeasurable generosity as prolific composer for many different types of musicians, major advocate for the works of others, and performer and conductor who has also been a driving force behind ensembles; he was also President of the International Society for Contemporary Music from 1990 to 1996. His vast and enormously varied output confounds those who seek easy categorisations: once associated strongly with the ‘new complexity’, Finnissy is equally known as composer regularly engaged with many different folk musics, for working with amateur and community musicians, for a long-term engagement with sacred music, or as an advocate of Anglo-American ‘experimental’ music. Twenty years ago, a large-scale volume entitled Uncommon Ground: The Music of Michael Finnissy gave the first major overview of the output of any ‘complex’ composer. This new volume brings a greater plurality of perspectives and critical sensibility to bear upon an output which is almost twice as large as it was when the earlier book was published. A range of leading contributors – musicologists, composers, performers and others – each grapple with particular questions relating to Finnissy’s music, often in ways which raise questions relating more widely to new music, and provide theoretical foundations for further of study both of Finnissy and other composers.

Ian Pace (b. 1968) is internationally renowned as the leading pianistic interpreter of Finnissy’s work, as well as a major scholar who has written extensively on compositional, aesthetic, and performative aspects of Finnissy’s music, including major sketch study. He gave a six-concert series of Finnissy’s complete piano music in 1996 for the composer’s fiftieth birthday, and followed this twenty years later with an eleven-concert series of the now vastly expanded output, including a complete performance of Finnissy’s epic five-and-a-half-hour cycle The History of Photography in Sound, which he premiered in London in 2001, recorded for Divine Art, and about which he published a monograph. More widely, Pace is well-known as a staunch advocate of new music who has given over 300 world premieres, played in over 25 countries, and recorded over 30 CDs. He is also a musicologist, and is Senior Lecturer and Head of Performance at City, University of London, having previously worked at Southampton University and Dartington College of Arts. His PhD was on new music and its infrastructure in West Germany from the Weimar Republic to the early Allied Occupation. Other areas of expertise include nineteenth-century performance practice, contemporary performance and practice-as-research, critical musicology, avant-garde aesthetics, and music under fascism and communism.

(b. 1990) is a composer and researcher. He was educated at The Queen’s University, Belfast, and St. Anne’s and Magdalen Colleges, Oxford. His research primarily focuses on philosophical approaches to compositional and musicological issues. While at Oxford, he taught composition and musicology extensively, as well as developed and convened the seminar series The Composers’ Forum at Magdalen College. As a composer, he has collaborated with many leading performers of new music, including Ian Pace, Christopher Redgate, Gleb Kanasevich, Jack Adler-Mckean, The Cavaleri String Quartet, Jonathan Powell, and others. His music has been performed in Germany, across the UK, the USA, and others.