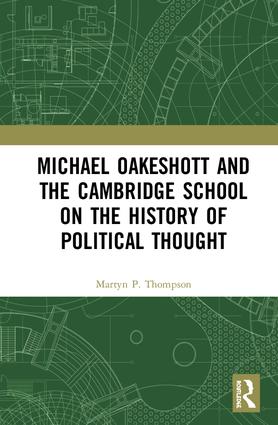 This book is a critique of Cambridge School Historical Contextualism as the currently dominant mode of history of political thought, drawing upon Michael Oakeshott’s analysis of the logic of historical enquiry.

An important work for political theorists, historians of political thought and those researching intellectual history, the philosophy of history and proposed new directions in contemporary historical studies.

"Martyn Thompson’s book will surely stand as one of the most incisive and compelling defenses of the autonomy of historical experience and historical explanation in recent years. He has also made a convincing case that Michael Oakeshott should be considered the pre-eminent philosopher of history in the 20th century. He has accomplished both of these while also offering an insightful examination of the strengths and a trenchant critique of the weaknesses of the ‘Cambridge School’ of intellectual history." - Kenneth B. McIntyre, Associate Professor, Sam Houston State University, USA, and author of The Limits of Political Theory: Oakeshott’s Philosophy of Civil Association.

"The publication of Martyn Thompson’s new book on Michael Oakeshott has been keenly awaited by historians of political thought, as well by as Oakeshott specialists. I am sure they will find his lucid and provocative study well worth the wait." - Richard F Teichgraeber III, Tulane University, USA

Part I: Two Historiographical Problems in Search of Solutions

Chapter 2: Logic and Method in the History of Political Thought

Part II: The Pastness of Past Political Thinking.

Chapter 3: The Pastness of the Historical Past

Chapter 4: Oakeshott on the History of Political Thinking

Chapter 5: Pocock and Skinner on Oakeshott

Part III: The Varieties of Past Political Thinking.

Chapter 7: The Logic of the History of Political Philosophy

Chapter 8: Conclusion: The Use and Abuse of History

Martyn P. Thompson is Associate Professor of Political Theory in the Department of Political Science at Tulane University, USA. His main fields of research and publication are the history of political thought since the Renaissance, literature and politics and contemporary German political theory. He was formerly Professor of English Literature and Intellectual History at Tübingen University, Germany where his research and publications focused on English political and satirical literature of the eighteenth and nineteenth centuries as well as German theories of literary history.

Professor Thompson has two doctorates, the first a Ph.D. in the history of political thought from the London School of Economics, the second (the Habilitation) in English literature and cultural history from Tübingen University. He has been a faculty member in the universities of London, Tübingen, Cambridge and Tulane. His honors include a Fellow Commonership (now a By-Fellowship) at Churchill College, Cambridge University; Fellowships at the Huntington Library and the William Andrews Clark Library in California; and honorary life memberships of the R.G. Collingwood Society and the Michael Oakeshott Association.

His publications include: Ideas of Contract in English Political Thought in the Age of John Locke (1987); an edited volume, Locke and Kant: Historical Reception and Contemporary Relevance (1991); and many book chapters and articles in major journals including the American Historical Review, Political Studies, Political Theory, Historical Journal, Journal of the History of Ideas, and History and Theory. He has been co-editor and contributor to the annual Politisches Denken Jahrbuch from its inaugural edition in 1991 to the present.