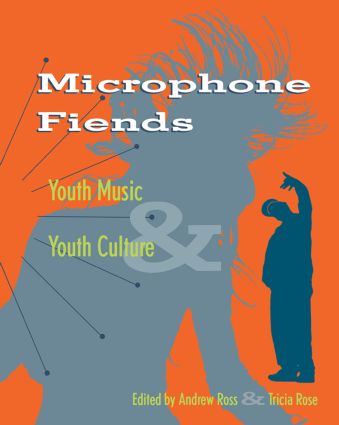 Microphone Fiends, a collection of original essays and interviews, brings together some of the best known scholars, critics, journalists and performers to focus on the contemporary scene. It includes theoretical discussions of musical history along with social commentaries about genres like disco, metal and rap music, and case histories of specific movements like the Riot Grrls, funk clubbing in Rio de Janeiro, and the British rave scene.

"…[This book] is the screaming child demanding attention not only from scholars but from mainstream music journalists as well. The strength of this collection, which is primarily cultural criticism, lies in its various and often conflicting approaches and perspectives." -- American Music, Fall 1996

"…everyone who contributes is bright, excited, and big with fruitful thoughts." -- Puncture

"A huge, multilayered cacphonus conversation, involving styles of popular music ranging from hardcore rap to college rock to rave to Brazilian funk, represented by participants from all avenues of musical culture. The radical decision to include artists and members of the popular press alongside academics means that the voices included within Microphone Fiends don't conform to one language, they argue with each other and with themselves, unafraid of the rebel stance that has characterized youth culture from its rowdy, world-changing birth. Listening to each other, artists, culture workers, and scholars can uncover insights about the pop-cult ground they cultuivate that otherwise would have eluded them." -- Ann Powers, The Village Voice

"Expression is what youth music and youth culture are all about, a mode of expression that has been lacking in a social perspective. The diversity of the book reflects the "multiculturalism" within, giving a precise sub-cultural analysis. The book's dedication to youth musical culture only makes Microphone Fiends better. Fortunately, it has matured to a point where it can report on itself competently. Microphone Fiends definitely represents the music behind its cultures."

"I bet Microphone Fiends becomes required reading in musical history classes everywhere. This exhaustive dissertation of popular (and not so popular) music forms is basically a collection of articles, commentaries and discussions on everything from raves to riot grrls." -- Thrust,#23

". . .strike[s] a welcome balance between self-aware and self-concious pronouncements on the next generation." -- Publisher's Weekly

"…[This book] is the screaming child demanding attention not only from scholars but from mainstream music journalists as well. The strength of this collection, which is primarily cultural criticism, lies in its various and often conflicting approaches and perspectives." -- American Music, Fall 1996