Migration and Agriculture
Mobility and change in the Mediterranean area 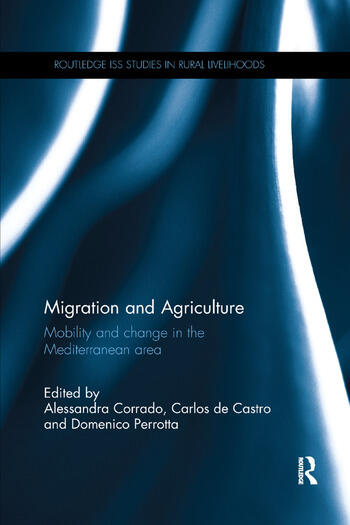 Migration and Agriculture: Mobility and change in the Mediterranean area

In recent years, Mediterranean agriculture has experienced important transformations which have led to new forms of labour and production, and in particular to a surge in the recruitment of migrant labour. The Mediterranean Basin represents a very interesting arena that is able to illustrate labour conditions and mobility, the competition among different farming models, and the consequences in terms of the proletarianization process, food crisis and diet changes.

brings together international contributors from across several disciplines to describe and analyse labour conditions and international migrations in relation to agri-food restructuring processes. This unique collection of articles connects migration issues with the proletarianization process and agrarian transitions that have affected Southern European as well as some Middle Eastern and Northern African countries in different ways. The chapters present case studies from a range of territories in the Mediterranean Basin, offering empirical data and theoretical analysis in order to grasp the complexity of the processes that are occurring.

This book offers a uniquely comprehensive overview of migrations, territories and agro-food production in this key region, and will be an indispensable resource to scholars in migration studies, rural sociology, social geography and the political economy of agriculture.

Chapter 2 – The (sacred) cow business. Narratives and practices of the "ethnic niche" of Indian Punjab milkers in the Po Valley, Vanessa Azzeruoli

Chapter 3 - Wine heritage and the ethnicization of labour. Arab workers in the Bordeaux vineyards, Chantal Crenn

Chapter 4 - Processing tomatoes in the era of the retailing revolution. Mechanization and migrant labour in northern and southern Italy, Domenico Perrotta

Chapter 12 - "They know that you'll leave, like a dog moving onto the next bin". Undocumented male and seasonal contracted female workers in agricultural labour market of Huelva, Spain. Emmanuelle Hellio

Chapter 14 – From the Al-Maghrib to the Al-Gharb: An anatomy of the recruitment and labour incorporation of Moroccan agricultural workers in the Algarve, Southern Portugal, Dora Sampaio, Rui Carvalho

Chapter 15 – Agricultural modernization, internal migration and the formation of a wage labour market in the Souss region, Morocco. Mohamed Bouchelkha,

Chapter 16 – Rural and farmers’ protest movements in Tunisia and Egypt in the era of Arab revolts, Alia Gana

Chapter 19 – Agrarian change and migrations in the Mediterranean from a food regime perspective. Alessandra Corrado

Alessandra Corrado is assistant professor in the Department of Political and Social Sciences, University of Calabria, and founding member of the Study Center for Rural Development, Italy.

is lecturer in the Department of Sociology at the Universidad Autónoma of Madrid, Spain.

is tenured researcher and lecturer in the Sociology of Cultural Processes at the University of Bergamo, Italy.