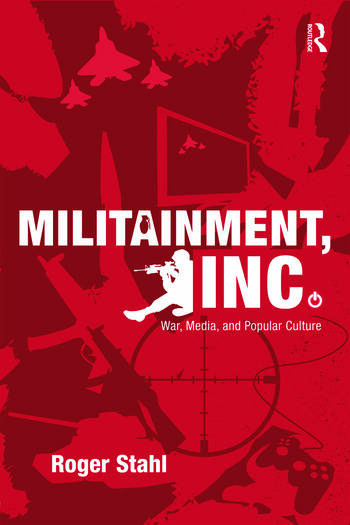 Militainment, Inc. offers provocative, sometimes disturbing insight into the ways that war is presented and viewed as entertainment—or "militainment"—in contemporary American popular culture. War has been the subject of entertainment for centuries, but Roger Stahl argues that a new interactive mode of militarized entertainment is recruiting its audience as virtual-citizen soldiers. The author examines a wide range of historical and contemporary media examples to demonstrate the ways that war now invites audiences to enter the spectacle as an interactive participant through a variety of channels—from news coverage to online video games to reality television. Simply put, rather than presenting war as something to be watched, the new interactive militainment presents war as something to be played and experienced vicariously. Stahl examines the challenges that this new mode of militarized entertainment poses for democracy, and explores the controversies and resistant practices that it has inspired.

This volume is essential reading for anyone interested in the relationship between war and media, and it sheds surprising light on the connections between virtual battlefields and the international conflicts unfolding in Iraq and Afghanistan today.

Roger Stahl is Assistant Professor of Speech Communication at the University of Georgia. His work has appeared in publications such as Rhetoric and Public Affairs, The Quarterly Journal of Speech, and Critical Studies in Media Communication. He wrote, produced, and narrated the 2007 documentary film Militainment, Inc.: Militarism and Pop Culture, which is distributed by the Media Education Foundation.

"While many have written about militarism, and many more have written about the entertainment industry, I do not know of a book that ties the two together in such an insightful argument. 'Militainment, Inc' is a smart and engaging book about how US citizens relate to and engage with US military actions and how the increasing integration of militarism and the entertainment industries limits democratic commentary. I can't imagine anything more timely."

—Susan Jeffords, University of Washington and author of Remasculinization of America: Gender and the Vietnam War

"Roger Stahl has systematically researched U.S. popular culture and recent military history and has provided a highly illuminating study of how recent wars have been produced as media spectacles and processed by audiences as entertainment, hence the term Militainment. Providing illuminating studies of the media, sport, video games, TV reality shows, and other forms of militainment, Stahl’s book should be read by everyone concerned with the intersection of war and entertainment in the contemporary era."

—Douglas Kellner, UCLA and author of the forthcoming Cinema Wars: Hollywood Film and Politics in the Bush/Cheney Era

"From the thrills of virtual war worlds to macabre fascinations with deadly killing fields, Roger Stahl tracks a culture where war and its horrors are transformed into a landscape of entertainment. This new geography of Militainment is mapped with great skill in an original work that is essential reading for those who would like to see beyond the battlefield to a world of peace and stability."

—Robin Andersen, author of A Century of Media, A Century of War, winner of the Alpha Sigma Nu Book Award 2007