Military Aspects of the Israeli-Arab Conflict 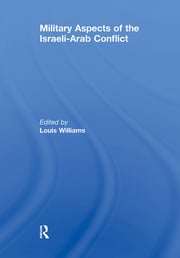 Military Aspects of the Israeli-Arab Conflict

The Arab-Israeli conflict is fraught with political complexity. It entails long-standing, entrenched views on the part of all the participants, direct and indirect, and is heavily charged with emotion. It is a subject of great political and military actuality. The Middle East is fast becoming a testing ground for modern weapons systems and for modern, conventional war doctrines, a recent example being the Yom Kippur War.Most publications - articles, papers, books - on the war were produced while sentiments were still high and the armies still formulating their conclusions. Confusion, controversy, and emotions eclipsed clarity. An international symposium was held two years after the war to objectively debate the war, its lessons, and the Middle East conflict in general.This book contains all of the speeches and papers presented at that symposium plus a record of three related events. These were question-and-answer sessions with Prime Minister Yitzhak Rabin, Foreign Minister Yigal Allon, and Jerusalem Mayor Teddy Kollek. These interviews, along with the symposium, contribute to an understanding of the Middle East conflict and of the thinking and personalities of key figures in Israeli life and politics.Contents and Contributors:OPENING CEREMONY Shimon Peres THE ART OF WAR - EAST AND WEST Saadia Amiel, Uzi Eilam, Amnon Sella, Edward Luttwak, Kenneth Hunt, Moshe Arens, Daniel Shimshoni QUESTION AND ANSWER SESSION Teddy Kollek MILITARY REPORTING IN CLOSED AND OPEN SOCIETIES Dina Goren, Michael Elkins, Arnon Zuckerman SUPERPOWER COMPETITION IN THE MIDDLE EAST Abraham Becker, Arnold Horelick, Geoffrey Kemp, Nissan Oren, Haim Bar-kai, Haim Shaked QUESTION AND ANSWER SESSION Yigal Allon MILITARY BALANCE OF POWER IN THE MIDDLE EAST Shimon Shamir, David Kochav, Shlomo Gazit, Yehezkel Dror, Matityahu Mayzel, Mor-dechai Gur MEET THE PRESS Yitzhak Rabin THE YOM KIPPUR WAR: A REVIEW OF THE MAIN BATTLES IN RETROSPECT - AND THEIR LESSONS Benyamin Telem, Binyamin Peled, David Elazar, Haim Bar Lev