Military Legacies
A World Made By War 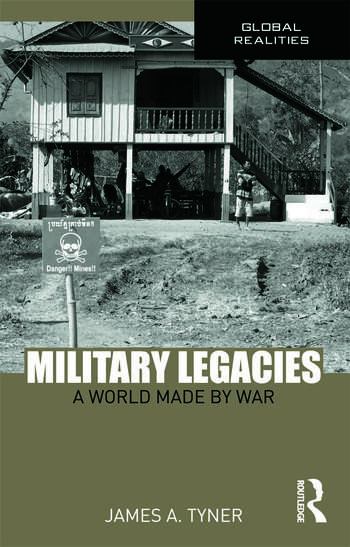 Military Legacies: A World Made By War

Landmines, cluster-bombs, chemical pollutants, and other remnants of war continue to cause death to humans and damage to the environment long after the guns have fallen silent. From the jungles of Vietnam to the arctic tundra of Russia, no region has escaped the legacy of warfare.

To understand the legacy of modern militarism, this book presents an overview of post-conflict societies, with an emphasis on the human toll exacted by modern warfare.

James A. Tyner (Ph.D., University of Southern California) is Professor of Geography at Kent State University. His research interests include population geography, political geography, and Southeast Asia. He is the author of ten books, including The Philippines: Mobilities, Identities, Globalization (Routledge).

"Tyner’s book provides a compelling and meticulous global geographical account of the many ways in which 'war is hell.' From landmines to napalm, from radiation sickness to agent orange, Tyner brilliantly dissects the wartime cruelties of humans to other humans and to the living material world they inhabit."—Trevor Barnes, University of British Columbia, Canada

"Refreshing, salient, and erudite. Tyner has clearly highlighted the emergence of a twentieth century industrial militarism that has irrevocably altered the conduct of warfare and by extension, made our world ever more dangerous – not only for states but for the civilian populations that inhabit the militarized landscapes of the present."—Steven Oluic, U.S. Military Academy, USA

"Tyner traces a shift from the promotion of military interests by sovereign states towards a profit-making objective of globalizing, industrial interests. This development and the deployment of new armament technologies have involved increasing numbers of civilians in conflicts and have left a legacy of landscapes around the world that continue to kill men, women, and children."—Shannon O’Lear, Kansas University, USA

"Tyner’s War, Violence, and Population:Making the Body Count and Military Legacies: AWorld Made by War, two of his latest works, offer compelling and provocative enquires into the deadly legacies of militarized violence that continue well into the future. Tyner examines the intimate connections between populations and political violence, and makes a timely contribution to the field of population geography that scholars from a wide range of disciplines will be obliged to take into account for many years." —Elizabeth Lee, Department of Geography,  University of British Columbia, Canada