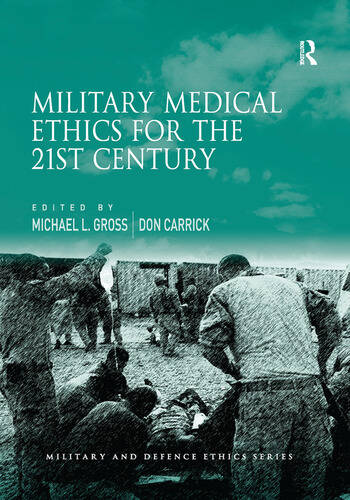 As asymmetric ’wars among the people’ replace state-on-state wars in modern armed conflict, the growing role of military medicine and medical technology in contemporary war fighting has brought an urgent need to critically reassess the theory and practice of military medical ethics. Military Medical Ethics for the 21st Century is the first full length, broad-based treatment of this important subject. Written by an international team of practitioners and academics, this book provides interdisciplinary insights into the major issues facing military-medical decision makers and critically examines the tensions and dilemmas inherent in the military and medical professions. In this book the authors explore the practice of battlefield bioethics, medical neutrality and treatment of the wounded, enhancement technologies for war fighters, the potential risks of dual-use biotechnologies, patient rights for active duty personnel, military medical research and military medical ethics education in the 21st Century.

Michael L. Gross is Professor of Political Science in the Division of International Relations at The University of Haifa, Israel. Don Carrick is Coordinator of the Military Ethics Education Network based in the Institute of Applied Ethics at the University of Hull, UK.

’We face decades of complex conflict and advances in science and technology that could be applied to produce novel weapons. In that future, doctors, soldiers and scientists will face difficult ethical problems. Whilst concentrating on military medical issues, the diverse essays in this book demonstrate well the quality of analysis that will be required to help practitioners deal with such critical issues.’ M.R. Dando, University of Bradford, UK ’Armed conflict is changing before our eyes and discussions of military medical ethics need to keep pace. The carefully selected items in this collection form the basis for an informed discussion of this exceedingly complex and rapidly developing field.’ Jonathan Moreno, University of Pennsylvania Philadelphia, USA