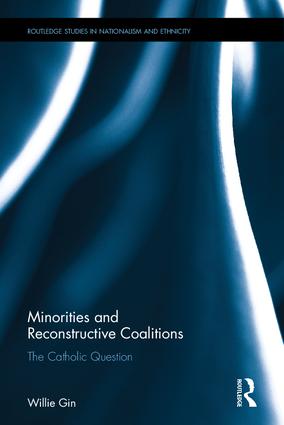 As with Muslims today, Catholics were once suspected of being antidemocratic, oppressive of women, and supportive of extremist political violence. By the end of the twentieth century, Catholics were considered normal and sometimes valorized as exemplary citizens. Can other ethnic, racial, and religious minorities follow the same path? Minorities and Reconstructive Coalitions provides an answer by comparing the stories of ethnic Catholics’ political incorporation in Australia, Canada, and the United States. Through comparative and historical analysis, the book shows that reconstructive coalitions, such as labor and pan-Christian moral movements, can bring Catholics and Protestants together under new identities, significantly improving Catholic standing. Not all coalitions are reconstructive or successful, and institutional structures such as regional autonomy can enhance or inhibit the formation of these coalitions. The book provides overviews of the history of Catholics in the three countries, reorients the historiography of Catholic incorporation in the United States, uncovers the phenomenon of minority overrepresentation in politics, and advances unique arguments about the impact of coalitions on minority politics.

Ch. 1. The Multiplicity of the Catholic Past

Ch. 4. Working with Catholicism in Australia

Ch. 5. Catholicism at Arm’s Length in the United States

Ch. 7. Catholic Standing in the Latter Half of the 20th Century

Ch. 8. Realigning Catholicism and Protestantism in the United States

Ch. 9. The Limits of Pan-Christian Coalitions in Australia and Canada

Ch. 10. The Catholic Past as Prologue? The Future of Ethnic, Racial, and Religious Minority Political Incorporation

received his doctorate in political science from the University of Pennsylvania and is currently an assistant professor at Xavier University of Louisiana. His main areas of research interest are in minority incorporation, American political development, and how current technology affects both racial and income inequality. He has recently published in journals such as Politics and Religion.

Routledge Studies in Nationalism and Ethnicity

This  series draws attention to some of the most exciting issues in current world political debate: nation-building, autonomy and self-determination; ethnic identity, conflict and accommodation; pluralism, multiculturalism and the politics of language; ethnonationalism, irredentism and separatism; and immigration, naturalization and citizenship. The series includes monographs as well as edited volumes, and through the use of case studies and comparative analyses will bring together some of the best work to be found in the field.