Mints, Dies and Currency
Essays dedicated to the memory of Albert Baldwin 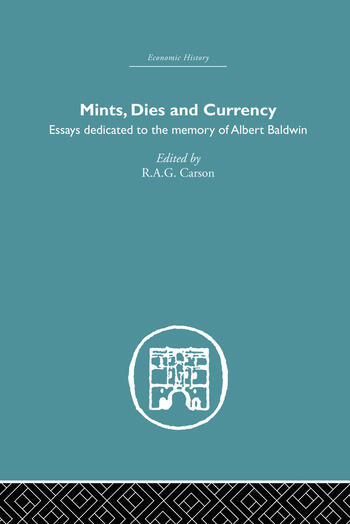 Mints, Dies and Currency: Essays dedicated to the memory of Albert Baldwin

The studies assembled in this volume are dedicated to the memory of Albert Baldein, a professional numismatist whose chief interest lay in helping other numismatists, professionals, students and collectors alike, some of whom record their appreciations here. The contributions, though they are drawn from a wide variety of fields - Greek, Roman, Dark Age, Byzantine, English, Scottish, Irish and European medieval coins, and medals - are all concerned with one or more facets of the theme set out in the title. Within the general concept, the essays deal with a diversity of subjects:

* identification of mints
* attribution of coins to specific mints
* coinage current in particular periods
* composition of groups of coins in a given series
* establishment of the correct sequence of issues of such groups.

The essays also demonstrate the use of particular numismatic techniques such as die-linking, the analysis of hoards and their statistics, the minute observation of changes in titulature and inscriptions and comparison of portrait styles. There is much new, exciting and well-illustrated material for numismatists, and chapters such as those on Scottish mints and Hadrian's COS III coins will be of interest to historians.

2. Sydenham in Retrospect: Revisions, Corrections, adn some rare and unpublished Additions to that Author's 'The Coinage of the Roman Empire' by Charles A. Hersh

3. Some Politic Alterations in the Parthian Series by D.G. Sellwood

4. The Dating and Arrangement of Hadrian's COS III Coins of the Mint of Rome by P.V. Hill

6. The Coinage of Theodoric in the Names of Anastasius and Justin I by J.P.C. Kent

7. A Hoard fo Trachea of John II and Manuel I from Cyprus by P.J. Donald and Philip Whitting

8. A Celtic Find from a Lincolshire Dyke by D.F. Allen

9. The Mints of Northampton and Southampton up to the Time of Edgar's Reform by C.E. Blunt and Michael Dolley

10. Variations in Currency in Late Anglo-Saxon England by C.S.S. Lyon

11. A Supplementary Note on the Mints of Bedwyn and Marlborough by F. Elmore Jones

14. The Sovereign Groat of Henry VII by E.J. Winstanley

16. The Anomalous Long-Cross Coins in the Anglo-Irish Portion of the Brussels Hoard by Michael Dolley and W.A. Seaby

18. The Medal of Jan van Gorp by Steven van Herwijck by J.G. Pollard