Mobile Data Visualization is about facilitating access to and understanding of data on mobile devices. Wearable trackers, mobile phones, and tablets are used by millions of people each day to read weather maps, financial charts, or personal health meters. What is required to create e­ffective visualizations for mobile devices? This book introduces key concepts of mobile data visualization and discusses opportunities and challenges from both research and practical perspectives.

Mobile Data Visualization is the first book to provide an overview of how to e­ffectively visualize, analyze, and communicate data on mobile devices. Drawing from the expertise, research, and experience of an international range of academics and practitioners from across the domains of Visualization, Human Computer Interaction, and Ubiquitous Computing, the book explores the challenges of mobile visualization and explains how it diff­ers from traditional data visualization. It highlights opportunities for reaching new audiences with engaging, interactive, and compelling mobile content.

In nine chapters, this book presents interesting perspectives on mobile data visualization including: how to characterize and classify mobile visualizations; how to interact with them while on the go and with limited attention spans; how to adapt them to various mobile contexts; specific methods on how to design and evaluate them; reflections on privacy, ethical and other challenges, as well as an outlook to a future of ubiquitous visualization. This accessible book is a valuable and rich resource for visualization designers, practitioners, researchers, and students alike.

Raimund Dachselt is a Full Professor of Computer Science at the Technische Universität Dresden, Germany. Since 2012, he leads the Interactive Media Lab Dresden at the Faculty of Computer Science. He received his PhD in 2004 from TU Dresden and was Professor for User Interface Engineering at the University of Magdeburg from 2007 to 2012. His research interests are at the intersection of natural, multimodal human computer interaction (HCI) and data visualization. He worked extensively in the area of interactive surfaces from smartwatches over tabletops to wall-sized displays and expanded the scope to Mixed Reality interfaces for immersive data analysis. He contributed several novel interface approaches for information visualization. He has co-authored more than 220 peer-reviewed publications and two major German HCI textbooks and received several Best Paper Awards at leading conferences. He has co-organized 17 international workshops at ACM and IEEE conferences, is the head of the ACM ISS steering committee and repeatedly served in numerous chairing and organizational roles as well as a PC member for international conferences.

Petra Isenberg is a research scientist at Inria, Saclay, France in the Aviz team and part of the Computer Science Laboratory of University Paris-Saclay (LISN). Prior to joining Inria, she received her PhD from the University of Calgary in 2010 on collaborative information visualization. Petra also holds a Diplom-engineer degree in Computational Visualistics from the University of Magdeburg. Her main research areas are visualization and visual analytics with a focus on non-desktop devices,  interaction, and evaluation. She is particularly interested in exploring how people can most effectively work together when analyzing large and complex data sets on novel display technology such as small touch-screens, mobile devices, and wall displays, or tabletops. Petra is associate editor-in-chief at IEEE CG&A, associate editor of the IEEE Transactions on Visualization and Computer Graphics, has served on many organizing committee roles in various conferences, and has been the co-chair of the biennial Beliv workshop from 2012–2018.

Eun Kyoung Choe is an Associate Professor in the College of Information Studies at the University of Maryland, College Park. She received her PhD in Information Science from University of Washington, MS in Information Management and Systems from University of California, Berkeley, and BS in Industrial Design from KAIST. Her work sits at the intersection of HCI, Ubiquitous Computing, and Personal Informatics. With an overarching goal of empowering individuals, she examines some of the major challenges people face in leveraging personal data, such as data collection, data exploration, and data sharing. Drawing insights from formative studies, she designs novel systems to support personalized data collection and multimodal data exploration for people to interact with data. Her work has been funded by the National Science Foundation, National Institute of Health, and Microsoft Research. She has been serving on the editorial boards of PACM IMWUT and Foundations and Trends in Human-Computer Interaction, and as a subcommittee chair for CHI Health (2020–2021).

“Finally, the book I have wanted! An all-star team of researchers thoroughly survey the territory and show us the view up to and beyond the horizon. I’ve been waiting for a book like Mobile Data Visualization to open the doors to many possibilities for future uses and devices.” 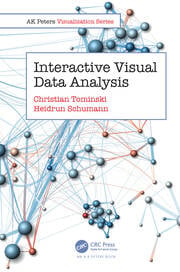