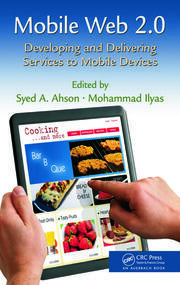 From basic concepts to research grade material, Mobile Web 2.0: Developing and Delivering Services to Mobile Devices provides complete and up-to-date coverage of the range of technical topics related to Mobile Web 2.0. It brings together the work of 51 pioneering experts from around the world who identify the major challenges in Mobile Web 2.0 applications and provide authoritative insight into many of their own innovations and advances in the field.

To help you address contemporary challenges, the text details a conceptual framework that provides modeling facilities for context-aware, multi-channel Web applications. It compares various platforms for developing mobile services—from the developer and user perspectives—and explains how to use high-level modeling constructs to drive the application development process through automatic code generation.


Through empirical study, the book tests a number of hypotheses on the use of software implementation technology and location context in mobile applications. It introduces Reusable End-User Customization (REUC)—a technique that allows users to adapt the layout of Web pages and automatically reapplies those preferences on subsequent visits. It also investigates the need for non-visual feedback with long system response times, particularly when downloading Web pages to mobile devices.

Syed A . Ahson is a senior software design engineer with Microsoft, Redmond, Washington. As part of the Mobile Voice and Partner Services Group, he is currently working on new and exciting end-to-end mobile services and applications. Before joining Microsoft, he was a senior staff software engineer with Motorola, where he made significant contributions in creating several iDEN, CDMA, and GSM cellular phones. Syed has extensive experience with wireless data protocols, wireless data applications, and cellular telephony protocols. Prior to joining Motorola, he worked as a senior software design engineer with NetSpeak Corporation (now part of Net2Phone), a pioneer in VoIP telephony software.

Syed has authored more than 10 books and several research articles on emerging technologies such as Cloud Computing, Mobile Web 2.0, and Service Delivery Platforms. His recent books include Cloud Computing and Software Services: Theory and Techniques and Mobile Web 2.0: Developing and Delivering Services to Mobile Phones. He teaches computer engineering courses as adjunct faculty at Florida Atlantic University, Boca Raton, and has introduced a course on Smartphone technology and applications. Syed received his MS in computer engineering from Florida Atlantic University in July 1998. He received his BSc in electrical engineering from Aligarh Muslim University, India, in 1995.

Dr. Mohammad Ilyas is associate dean for research and industry relations and professor of computer science and engineering in the College of Engineering and Computer Science at Florida Atlantic University, Boca Raton. He is also currently serving as interim chair of the Department of Mechanical and Ocean Engineering.

He received his BSc in electrical engineering from the University of Engineering and Technology, Lahore, Pakistan, in 1976. From March 1977 to September 1978, he worked for the Water and Power Development Authority, Pakistan. In 1978, he w