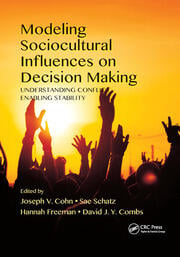 In our increasingly globally interconnected world, understanding and appreciating the sociocultural context within which individuals make their decisions is critical to developing successful partnerships. The collection of chapters in this volume illustrates how advances in information and social media technologies, as well as modeling and simulation tools, combined with the social sciences, can be leveraged to better understand how sociocultural context influences decision making.

The chapters in this volume were contributed by leading experts from academia, industry, and government and provide:

Introduction; Section I Building Theories; Expeditionary Modeling for Megacities and Other Dense Urban Areas; More than Just a Story: Narrative Insights into Comprehension, Ideology, and Decision Making; The Spread of Information via Social Media; The Spread of Opinions in Societies; Culture’s Influences on Cognitive Reflection; Cultural Influences on Cognitive Biases in Judgment and Decision Making: On the Need for New Theory and Models for Accidents and Safety; Section II Collecting and Analyzing Data; The Sixty Percent Mission: An Introduction to High-Risk Ethnography Process and Protocol in Support of the US Army’s Civil Affairs Humanitarian Mission; Challenges in Connecting with the Disconnected: An Introduction to Connecting with Communities Disconnected from the Rest of the World; They Are Beyond WEIRD: Helpful Frameworks for Conducting Non-WEIRD Research; Deciphering the Emic Perspective in Data in Order to Assess Threat; Collecting Data and Semantic Content via Mobile Devices; Measuring Changes in Attitudes: Using Factor Analysis to Track Population Attitudes Spatially and Temporally; Gaining Insight by Applying Geographical Modeling; Section III Building and Validating Sociocultural Models; Sociocultural Capability Requirements across All Phases of Military Operations; Methods to Characterize and Manage Uncertainty for Sociocultural Applications; Validating Causal and Predictive Claims in Sociocultural Models; Rapid Generation of Political Conflict Simulations for Scenarios around the World; Detailed Model Development Case Study: The Peace Game; Section IV Applying Sociocultural Models to Gain Insight into Conflict and Instability; Using the Social Framework Model of Trust to Better Understand Trust in Government; Understanding Public Opinion toward Violent Extremists; Modeling Sociocultural Influences on Decision Making: Assessing Conf

Joseph V. Cohn, PhD, earned his BS in biology from the University of Illinois–Urbana

Champaign in 1993. He earned his PhD in neuroscience from Brandeis University in 1998.

professional conferences on a host of topics, ranging from foundational neuroscience

to the nature of technical innovation. He has coedited a three-volume book series

enhancing human performance in high-risk environments. He has received industry and

and biomedical sciences. He cochaired the Applied Human Factors and Ergonomics

of the American Psychological Association and the Society of Military Psychologists,

as well as an associate fellow of the Aerospace Medical Association.

and cognitive scientist. She has headed an array of applied research efforts, authored more

and received industry awards for both her publications and her research efforts.

Decision Making Conference (2013–), is a service principal for the Interservice/Industry

"The structure of the book is excellent and gives a framework for organizing ideas in this complex area. Hopefully books like this will by a catalyst for more work in the area and a further maturation of the models and what we can use them for."
— Rudolph Darken, Naval Postgraduate School, USA

"I think this book will impact current and future work in the areas that form the intersection of applied social science, computer science, and sociocultural methods. It provides an integrated stance on very complex social and computational issues while retaining a sense for practical application. The book offers a nice blend of theoretical, methodological, and application-focused chapters that will aid a reader in learning about sociocultural topics and applying cutting-edge methods to the real-world issues. The editors have successfully compiled a diverse set of experts to explore very challenging issues that have very real implications for the military, and more broadly, the global business and social domains."
— Joseph B. Lyons, Air Force Research Laboratory, USA