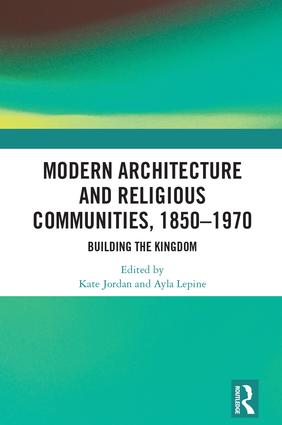 Social groups formed around shared religious beliefs encountered significant change and challenges between the 1860s and the 1970s. This book is the first collection of essays of its kind to take a broad, thematically-driven case study approach to this genre of architecture and its associated visual culture and communal experience. Examples range from Nuns’ holy spaces celebrating the life of St Theresa of Lisieux to utopian American desert communities and their reliance on the philosophy of Teilhard de Chardin.

Modern religious architecture converses with a broad spectrum of social, anthropological, cultural and theological discourses and the authors engage with them rigorously and innovatively. As such, new readings of sacred spaces offer new angles and perspectives on some of the dominant narratives of the nineteenth, twentieth and twenty-first centuries: empire, urban expansion, pluralism and modernity. In a post-traditional landscape, religious architecture suggests expansive ways of exploring themes including nostalgia and revivalism; engineering and technological innovation; prayer and spiritual experimentation; and the beauty of holiness for a brave new world. Shaped by the tensions and anxieties of the modern era and powerfully expressed in the space and material culture of faith, the architecture presented here creates a set of new turning points in the history of the built environment.

Introduction: Building the Kingdom: Architecture, Worship, and the Sacred,

Part I. Pilgrimage and Modern Journeys

1 Sisterly Love in Lisieux: Building the Basilica of Sainte-Thérèse

3 The Construction of Modern Montserrat: Architecture, Politics and Ideology

9 Situating Jerusalem: Poesis and Techne in the American Urbanism of Jemima Wilkinson and Thomas Jefferson

12 Nuns in the Suburb: The Berlaymont Institute in Waterloo by Groupe Structures

Kate Jordan is a lecturer in history and theory in the Faculty of Architecture, University of Westminster. She regularly lectures at the V&A and previously taught architectural history at Queen Mary University of London. She wrote her doctoral thesis (UCL) on the role of nuns in the design and construction of nineteenth and twentieth-century convents - a subject upon which she has published and given numerous conference papers. Her current field of research is Benedictine architecture of the twentieth and twenty-first centuries. She is a former member of the Education Sub-committee of The Society of Architectural Historians Great Britain and currently serves on the Twentieth Century Society’s Casework Committee.

is a Visiting Fellow in Art History at the University of Essex. Her research focuses on the Gothic Revival and modern medievalism. She is Arts Editor of the Marginalia Review of Books and a trustee of Art and Christianity Enquiry. She has published on Anglican monasticism, sacred visual culture, and the meanings of modern Gothic imagery in Architectural History, Visual Resources, Music and Modernism, The New Elizabethan Age, the Oxford History of Anglicanism, and the Church Times. She has co-edited Gothic Legacies: 400 Years of Tradition and Innovation in Art and Architecture (with Laura Cleaver, 2012) and Revival: Identities, Memories, Utopias (with Matt Lodder and Rosalind McKever, 2015).