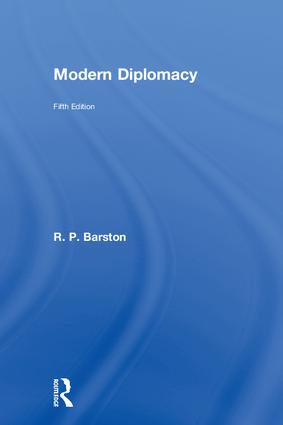 Contemporary, thoughtful and extensively illustrated, Modern Diplomacy examines a broad range of current diplomatic practice. This leading and widely used book - now in its fifth edition - equips students with a detailed analysis of important international issues that reflect and impact upon diplomacy and its relations. The subject is brought to life through case studies and examples which highlight the working of contemporary diplomacy within the international political arena.

Organised around five broad topic areas, including the nature of diplomacy, diplomatic methods, negotiation, the operation of diplomacy in specific areas and international conflict, the book covers all major topic areas of contemporary diplomacy.

New features for this edition:

"This is an invaluable textbook for those who study Diplomacy at both the undergraduate and postgraduate levels. Its insights into contemporary diplomatic practice, and coverage of key areas such as trade, finance and the environment, also means it is essential reading for those who seek to understand global governance and the ways in which international agreements are secured. This new edition is very much welcomed." - Fiona Robertson-Snape, Staffordshire University, UK

"I am very pleased Ronald Barston’s Modern Diplomacy has been updated. It is a classic with a very practical orientation. I have used it with excellent results both as a reference guide and as a core text for students." - Andrew F. Cooper, University of Waterloo, Canada

"In this new edition of Modern Diplomacy, Ronald Barston succeeds in improving on what is already a classic. He puts his direct experience of diplomacy to use in introducing readers to its nuts and bolts of its operations on a daily basis. Students will find the section on drafting treaties and agreements especially useful." - Paul Sharp, University of Minnesota Duluth, USA

1. The Changing Nature of Diplomacy

16. The Diplomacy of Normalisation

Professor R. P. Barston specialises in international relations and contemporary diplomacy. He previously taught at Lancaster University, London School of Economics and King’s College, and is a former member of the UK Foreign and Commonwealth Office with extensive diplomatic experience. International training missions include Malaysia (National Institute of Public Administration), Brunei, Vietnam and for maritime regulation, and, regional safety cooperation Jamaica; Trinidad. Previous publications include Maritime Dimension, The Other Powers and International Politics since 1945 .