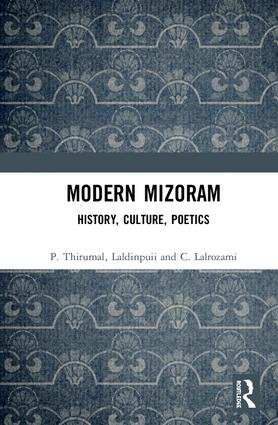 Mizoram is situated at a unique cusp in North East India, in terms of both physical and social contexts. It shares its borders with Myanmar and Bangladesh, while cultural influences range from the indigenous to the Western. This book offers an alternative understanding of the modern history of Mizoram through an analysis of its cultural practices through language, music, poetry and festivals. It explores the roots of modern cultural works not just in Christianity, but also in precolonial Mizo traditional practices. The authors closely examine text, performance and sculptural images, including the first handwritten newspaper Mizo Chanchin Laisuih (1898) and the Puma Zai festival (1907–11) from the early colonial period along with a contemporary sculptural image. They argue that cultural works open up to new forms of interpretations and responses over time. The book indicates that the Mizo creative sensibility enmeshed in theological, capitalistic-material and political/ideological regimes informs its modern enclosures, be it region, religion or nation.

‘Modern Mizoram tries to meet the following challenge: how does one write the history of a culture when the writing of history contradicts the oral spirit of the culture?

In attempting this formidable task, the authors examine a range of archival materials, i.e., newspapers and other records, without succumbing to a linear historical narrative of how Mizoram became modern according to India’s hegemonic expectations. The book addresses the problem of how Mizo culture transforms itself under the pressure of the Indian state which oscillates between a developmental ideology and a war machine.

This organic account of the history of Mizo culture is a useful addition of perspectives, methods and strategies of research. It will be of interest to scholars in Mizo political history, aesthetics, development, art and culture.’

List of Figures. Acknowledgements. Introduction 1. On the Discursive and Material Context of the First Handwritten Lushai newspaper Mizo Chanchin Laishuih 2. The Celebration of Puma Zai and the Self-Fashioning of the Lushai 3. The Postcolonial Inheritance of Puma Zai 4. Cultural Works and Their Conversation Across Temporalities: The Pheichham Image. Bibliography. Glossary. Index

P. Thirumal is Professor at the Department of Communication, S. N. School of Arts & Communication, University of Hyderabad, Telangana, India. His areas of interest and specialization include theory and history of media, histories of technologies and communities, borderland media history and the North East region of India. He has published in The Indian Economic and Social History Review, Seminar and the Economic & Political Weekly and has written for newspapers and periodicals.

teaches English at Government Aizawl West College, Mizoram, India. She was awarded a PhD at the Department of English, University of Hyderabad in 2017. Her thesis dealt with the formation of identities through Mizo and Khasi folktales. She has presented papers in national and international seminars and conferences and has contributed articles to journals.

is Programme Coordinator at the Directorate of State Council for Educational Research and Training, Aizawl, Mizoram, India. She has presented papers in several conferences and seminars and contributed articles in books and local magazines. She has prepared a number of documentary films and educational television programmes which have been broadcast in national channels such as Doordarshan Kendra and the regional channels.