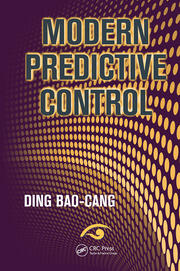 Modern Predictive Control explains how MPC differs from other control methods in its implementation of a control action. Most importantly, MPC provides the flexibility to act while optimizing—which is essential to the solution of many engineering problems in complex plants, where exact modeling is impossible.

The superiority of MPC is in its numerical solution. Usually, MPC is employed to solve a finite-horizon optimal control problem at each sampling instant and obtain control actions for both the present time and a future period. However, only the current control move is applied to the plant.

This complete, step-by-step exploration of various approaches to MPC:

This book gives researchers a variety of models for use with one- and two-step control. The author clearly explains the variations between predictive control methods—and the root of these differences—to illustrate that there is no one ideal MPC and that one should remain open to selecting the best possible model in each unique circumstance.

Finite-horizon control: an example based on "three principles"

The usual pattern for implementation of MPC

Step response model and its identification

Stability results not related to the concrete model coefficients

TSOFMPC: case where the intermediate variable is available

Sketch of synthesis approaches of MPC

Robust MPC based on closed-loop optimization

A simple approach based on partial closed-loop optimization

Approach based on single-valued open-loop optimization and its deficiencies

Approach based on parameter-dependent open-loop optimization and its properties

Conditions for stability and feasibility: case systems with I/O nonlinearities