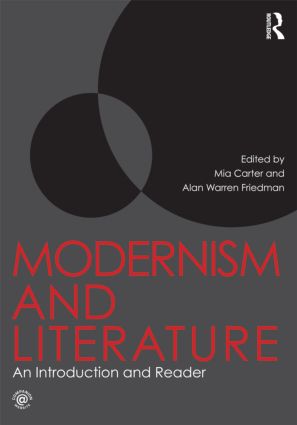 An Introduction and Reader, 1st Edition

This volume offers a comprehensive representation of the exciting, pivotal, and urgent nature of literary Modernism, as well as more recent approaches including the "global turn." Modernism can be difficult to understand without an awareness of contemporary concerns, so Mia Carter and Alan Friedman incorporate texts from a wide variety of disciplines such as art, politics, science, medicine, and philosophy.

Addressing current as well as historical debates about Modernism, this book includes discussion of the Harlem Renaissance, feminism and women’s writing, international and global movements and anti-imperialism, while acknowledging the variety of competing modernisms. This is the ideal guide for anyone seeking an overview and an in-depth treatment of this complex cultural turn and its foundational texts.

"This expertly assembled, comprehensive volume will be an indispensible reference work to students and teachers. Modernism and Literature demonstrates the interdisciplinary scope as well as the global relevance of modernism." Anita Patterson, Associate Professor of English, Boston University

"This exciting new anthology of modernist literature and culture will undoubtedly become an indispensable resource for readers, teachers, and researchers alike. The volume, with its carefully framed conjunction of texts, offers us a newly textured terrain and will certainly generate new perspectives on modernism." Dr. Anna Snaith, Reader in Twentieth-Century Literature, King’s College London

"Wide-ranging and multifaceted, Modernism and Literature combines extensive introductions to well-selected readings with an excellent critical apparatus. It amounts to the closest single volume there is to a comprehensive resource for graduate and undergraduate courses on Modernism." Peter Childs, Professor of Modern English Literature, University of Gloucestershire

"This reader impressively captures the modernist sense of excitement, danger and novelty. With its enterprising mix of familiar and less familiar texts, Modernism and Literature will be a major resource for students of the period." Peter Nicholls, Professor of English, New York University

"This will be an extremely helpful text for students, providing them a deeper historical sense of the roots of Modernism than most other anthologies, as well as a wider perspective in global sources." Susan Weisser, Adelphi University

"Mia Carter and Alan Friedman have done a wonderful job of providing us with a new primary map and with new highlighted routes connecting the various capitals of modernist studies. I wish I had had the book in my hands twenty years ago." Joshua Weiner, Associate Professor of English, University of Maryland, College Park

Mia Carter is a University Distinguished Teaching Associate Professor of Literature at the University of Texas at Austin; she was recognized as a University of Texas System Regents' Outstanding Teacher in 2010. Her fields of specialization are Modern Studies, Imperial and Postcolonial Studies, Cinema and Cultural Studies. Carter is co-editor (with Barbara Harlow) of Archives of Empire (Duke UP)and Orientalism and Imperialism: A Documentary Sourcebook (Basil Blackwell). Her articles have appeared in numerous anthologies and journals, including English Language Notes, Signs, Studies in European Cinema, and ALIF: Journal of Comparative Poetics. Her current work in progress is Virginia Woolf, History's Child: Heritage and Imagination.

Thaman Professor of English and Comparative Literature at the University of Texas, Austin, Alan Friedman has also taught at universities in England, France, and Ireland. His five authored books include Fictional Death and The Modernist Enterprise, Party Pieces: Oral Storytelling and Social Performance in Joyce and Beckett, and Multivalence: The Moral Quality of Form in the Modern Novel, and monographs on Lawrence Durrell and William Faulkner. His ten edited books and journals include compilations on Durrell, Beckett, Joyce, and Mario Vargas Llosa, plus Situating College English: Lessons from an American University. He has chaired UT’s Faculty Council and received its Civitatis Award for "dedicated and meritorious service."