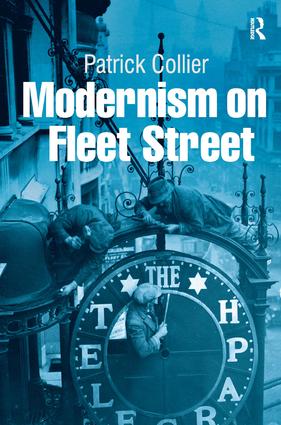 British modernism came of age at a time of great cultural anxiety about the state of journalism. The new newspapers, with their brief, flashy articles, striking visuals, hyperbolic headlines, and sensational news, stood at the center of debates about reading in the period, seeming to threaten the viability of representative democracy, the health and vitality of the language, and the very future of literature itself. Patrick Collier's study brings an impressive array of archival research to his exploration of modernism's relationship to the newspaper press. People who sought to make their way as writers could neither remain neutral on this issue nor abandon journalism, which offered an irreplaceable source of income and self-advertisement. Collier discusses five modern writers-T. S. Eliot, James Joyce, Virginia Woolf, Rebecca West, and Rose Macaulay-showing how their work takes part in contemporary debates about journalism and examining the role journalism played in establishing their careers. In doing so, he uncovers tensions and contradictions inherent in the identity of the 'serious artist' who relied on the ephemeral forms of journalism for money and reputation.

'An insightful, balanced, and much-needed account of modernism's relationship to the burgeoning newspaper press of early twentieth-century Britain, Modernism on Fleet Street will surely become the starting point for many important scholarly conversations about modernism and the public sphere. Collier makes an important contribution to our understanding of modernism's complex and enduring engagement with the commercial papers that had truly become a major, if controversial, force in British life.' Mark Morrisson, Penn State University 'This important discussion resonates for the 21st-century student of modernism or journalism. Recommended.' Choice ’… a complex and subtle study of cultural interrelations in the 20th century and one that is particularly rich in its material including a large amount of scattered newspaper articles, essays and letters not easy to research.’ Journal for the study of British Cultures ’Throughout Modernism on Fleet Street, Collier deftly combines generous readings of individual texts with careful attention to historical contexts… Collier's aim is ambitious: he intends 'to draw a new map of modernist ways of understanding and approaching the public.' He does this, and successfully, as, in Rebecca West's words, one of those 'writers … who humbly perform the kind of task of discovery and analysis that continues the tradition of English literature.’ English Literature in Transition ’Having had sufficient time to read and digest this monograph […], I feel able to commend this book to historians of the press and of twentieth-century British culture, as well as to its more obvious market of scholars of modernism. This is a rich and perceptive study of the heated interwar debates about the consumption of literature and journalism.’ H-Albion ’Collier does a wonderful job of bringing together disparate material, persuading us to look at texts that have drifted to the margins, making this a useful book for both student a

Contents: Introduction; 'Illiterate with periodicals': the threat of journalism; T.S. Eliot, the journalistic struggle, and the 'dialect of the tribe'; Virginia Woolf and the conditions of reviewing; 'Tell a graphic lie': Ulysses, reform, and repression; 'What the public wants': Rose Macaulay and her publics; Strange necessities: Rebecca West on art, journalism, and the public sphere; Postscript: modernism, newspapers, and the public sphere; Notes; Works cited; Index.

Patrick Collier is an Associate Professor of English at Ball State University, where he teaches nineteenth- and twentieth-century British literature and culture. He has published several articles on literature and journalism, and he previously worked as a newspaper reporter and freelance writer.