Monarchs and Hydrarchs
The Conceptual Development of Viking Activity across the Frankish Realm (c. 750–940) 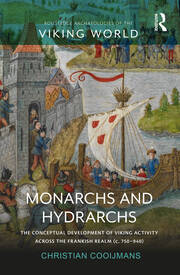 Monarchs and Hydrarchs: The Conceptual Development of Viking Activity across the Frankish Realm (c. 750–940)

As the politico-economic exploits of vikings in and around the Frankish realm remain, to a considerable extent, obscured by the constraints of a fragmentary and biased corpus of (near-)contemporary evidence, this volume approaches the available interdisciplinary data on a cumulative and conceptual level, allowing overall spatiotemporal patterns of viking activity to be detected and defined – and thereby challenging the notion that these movements were capricious, haphazard, and gratuitous in character.

Set against a backdrop of continuous commerce and knowledge exchange, this overarching survey demonstrates the existence of a relatively uniform, sequential framework of wealth extraction, encampment, and political engagement, within which Scandinavian fleets operated as adaptable, ambulant polities – or ‘hydrarchies’. By delineating and visualising this framework, a four-phased conceptual development model of hydrarchic conduct and consequence is established, whose validity is substantiated by its application to a number of distinct regional case studies. The parameters of this abstract model affirm that Scandinavian movements across Francia were the result of prudent and expedient decision-making processes, contingent on exchanged intelligence, cumulative experience, and the ongoing individual and collective need for socioeconomic subsistence and enrichment.

will appeal to both students and specialists of the Viking Age, whilst serving as an equally valuable resource to those investigating early medieval Francia, Scandinavia, and the North Sea world as a whole.

Christian Cooijmans is a British Academy Research Fellow at the University of Liverpool, UK. Having obtained his doctorate from the University of Edinburgh, his research focusses on the reach and repercussions of viking endeavour across mainland Europe, as well as its ensuing, premodern historiography.

Monarchs and Hydrarchs is an original and potentially important piece of work, which challenges widely accepted particularist interpretations of Viking activity in northern continental Europe, and rather seeks a coherent and dynamic understanding of the phenomenon. In applying the concept of ‘hydrarchy’ to the analysis of a range of sources (both well-known and under-researched), the study provides not only new data, but a new theoretical framework for their interpretation. Elegantly written and impressive in its interdisciplinary scope, this volume should be of significant interest to early medieval historians, archaeologists, and other scholars with or without previous knowledge of Scandinavian activity on the Continent.

This book is an essential read for anyone engaging on research on the Viking Age in Francia. In Monarchs and Hydrarchs, Cooijmans has combined detailed analysis of viking activity and politics with the application of abstract conceptual models to identify overarching patterns of behaviour. One of the great strengths of the book is Cooijmans’s ability to draw on sources in a variety of languages and from different disciplines to develop an original and overarching survey of this field.

The contacts between the Scandinavian world and the Frankish realm of Charlemagne and beyond have been commonly viewed through the lens of near-contemporary sources of variable bias, limited onomastic elements, and even fewer archaeological finds. An awareness of the incursions along the major waterways underpins our basic knowledge of the region. These rivers, selected as case study regions (Loire, Seine, and the Lower Rhine-Meuse-Scheldt basin) are viewed here by Cooijmans as ‘representing expansive corridors of waterborne commerce and communication’ and, crucially, the points of convergence of mariners from various origins – not only those from the northern neighbours. However, in exploring and indeed characterising the so-called hydrarchy established through targeted contact (up to the 840s CE) and intensive activity (840s–930s CE) in the region, Monarchs and Hydrarchs enables insight into changes from passing contact to permanent settlement in Francia.

Through the development of a temporal model, where the contact is subdivided into four distinct elements, commencing before the death of Charlemagne in 814 and progressing in intensity into the 930s, the author critically assesses the sources and demonstrates a clarity in the expedient decision-making of the vikings, based on ‘exchanges of intelligence, cumulative experience, and the collective need for socioeconomic subsistence and enrichment’. These words are the author’s, succinctly phrased and economically expressed, a true feature of the writing style of this volume. Through the detailed examination of the written sources in combination with a critical assessment of earlier scholarship, this author makes full use of the views of earlier scholars – building upon their strengths rather than fashionably demolishing all that has been written before. This is a valuable and major contribution to scholarship which will be well-cited for many years to come.