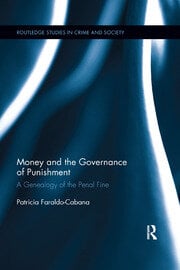 Money and the Governance of Punishment: A Genealogy of the Penal Fine

Money is the most frequently means used in the legal system to punish and regulate. Monetary penalties outnumber all other sanctions delivered by criminal justice in many jurisdictions, imprisonment included. More people pay fines than go to prison and in some jurisdictions many of those in prison are there because of failure to pay their fines. Therefore, it is surprising how little has been written in the Anglophone academic world about the nature of money sanctions and their specific characteristics as legal sanctions.

In many ways, legal innovations related to money sanctions have been poorly understood. This book argues that they are a direct consequence of the changing meaning of money. Considering the ‘meaninglessness’ of modern money, the book aims to examine the history of changing conceptions in how fines have been conceived and used. Using a set of interpretative techniques sensitive to how money and freedom are perceived, the genealogy of the penal fine is presented as a story of constant reformulation in response to shifting political pressures and changes in intellectual developments that influenced ideological commitments of legislators and practitioners.

This book is multi-disciplinary and will appeal to those engaged with criminology, sociology and philosophy of punishment, socio-legal studies, and criminal law.

2. The fine as the ideal penal sanction in the age of the Enlightenment

3. The impersonality of money: why and how fines paid by an innocent third party were prohibited

4. The unequal distribution of money and the (un)fairness of fines: why and how fines were made affordable

5. The expansion of the fine in the twentieth century

6. The triumph of the day-fine system? National perspectives and comparative approaches

Patricia Faraldo Cabana is Professor for Criminal Law at the University of A Coruña, in Spain, and Adjunct Professor at the Queensland University of Technology in Brisbane, Australia

"Fines are by far the most common form of punishment in consumer societies, yet the Anglophone world has largely overlooked their rapid growth since the 18th Century. This book fills that gap. It documents the history of punitive rationalities, meticulously charting the transformations in how the penal fine has been conceived over the last two hundred years. Over that time the meaning of money has changed, impacting on legal culture and practice, leading to the increased use of the penal fine as an alternative to imprisonment for a criminal offence. This is to be lauded given the failure of the prison as a rehabilitative practice. Given the vast disparities in wealth distribution, implementing a system of fines that is fair is fraught with layers of complexity, as Patricia Faraldo Cabana carefully articulates. Money and the Governance of Punishment argues that the more money has become synonymous with freedom, the bigger the bite of the fine to exercise the power to punish through the constraint of the liberty. There is much to appeal to a wide multi-disciplinary readership from legal studies, history, criminology, penology and sociology. I commend it to you."

"The book offers thought provoking reading of the history and development of the most used but least studied part of the criminal justice/(criminal sanction system). It takes the reader to a cross-comparative tour from the times of Beccaria and Bentham to the present day with rich historical materials, fascinating analyses, and, ultimately, a well-argued proposal for a more equal and fair system of criminal sanctions."

- Tapio Lappi-Seppälä, Professor and Director of the Institute of Criminology and Legal Policy, University of Helsinki, Finland

"In Money and the Governance of Punishment Patricia Faraldo Cabana has guided us through her powerful reconstruction of the history and development of pecuniary punishments throughout Europe, as well as of their use and meaning today. What is particularly insightful and compelling in Faraldo Cabana's volume is her ability to shed light at the same time on the legal structure and on the economy of the major European countries, looking at them from the very special vintage point of the fine, a perspective which links penality and the economy together. A veritable tour de force!"

- Dario Melossi, Professor of Criminology in the School of Law, University of Bologna, Italy