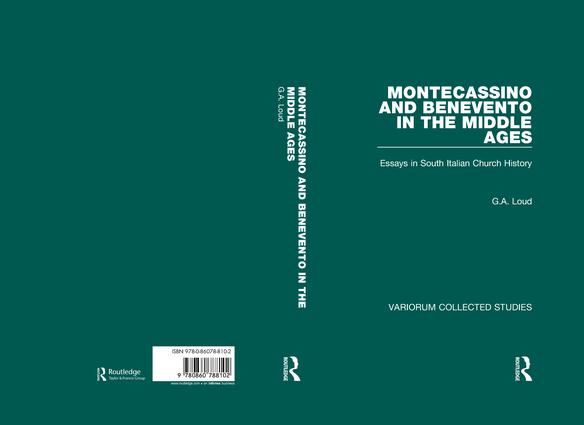 Montecassino and Benevento in the Middle Ages

This second volume by Graham Loud focuses on two key centres of the south Italian church in the central Middle Ages. The first section concentrates on the 'golden age' of the abbey of Montecassino, during the 11th and 12th centuries, when it was at the height of its influence and three of its monks became popes. The studies seek to place the abbey in its context, examining its relations with the papacy, Byzantium, and the local nobility. The second part deals with Benevento and the abbey of St Sophia, and looks at its development and administration, as well as the tensions that arose from its position as a papal enclave within the Kingdom of Sicily. Based on extensive archival research, the volume as a whole presents a fresh and original insight into the society of southern Italy from the coming of the Normans to its conquest by Charles of Anjou.

'… Dr Loud brings together distinguished studies…' English Historical Review '… brings together articles from a wide variety of sources into one, manageable book… contains a profound depth of research based on a review of current scholarship for topics that involve the monasteries Montecassino and Benevento in the high Middle Ages… extensive scholarly study of the topics, both in terms of his original research and of situating his work within current scholarship, through the numerous citations he gives of other scholars… The book has strength in terms of depth and detail which is not surpassed by other authors in this specialized field… Dr Loud provides detailed, scholarly research…' ABR