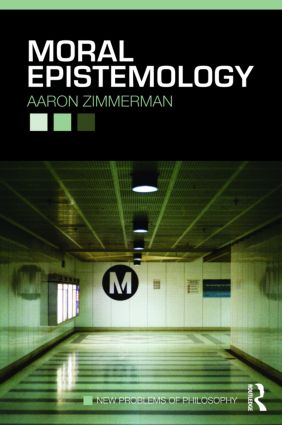 How do we know right from wrong? Do we even have moral knowledge? Moral epistemology studies these and related questions about our understanding of virtue and vice. It is one of philosophy’s perennial problems, reaching back to Plato, Aristotle, Aquinas, Locke, Hume and Kant, and has recently been the subject of intense debate as a result of findings in developmental and social psychology.

In this outstanding introduction to the subject Aaron Zimmerman covers the following key topics:

Throughout the book Zimmerman argues that our belief in moral knowledge can survive sceptical challenges. He also draws on a rich range of examples from Plato’s Meno and Dickens’ David Copperfield to Bernard Madoff and Saddam Hussein.

Including chapter summaries and annotated further reading at the end of each chapter, Moral Epistemology is essential reading for all students of ethics, epistemology and moral psychology.

'This volume is appropriate for a wide range of readers concerned with moral theory and moral epistemology. Summing Up: Recommended. Upper-level undergraduates through researchers/faculty.' - CHOICE

'Zimmerman provides a lively and lucid yet precise and profound introduction to moral epistemology. Structured around responses to moral skepticism, Zimmerman deftly incorporates Dickens and Madoff, developmental and moral psychology, philosophy of language and theory of knowledge. This entertaining romp is highly recommended not only for students but also for experts and anyone who wants to learn more about moral epistemology.' - Walter Sinnott-Armstrong, Duke University, USA

‘Written with verve and peppered with stimulating examples, Moral Epistemology provides an excellent introduction for the novice and plenty to engage experts. Zimmerman's critical assessment is accessible, balanced, rigorous, and richly informed by developmental and moral psychology, philosophy of language, and general epistemology. Anyone interested in moral skepticism and intuitionism, inferring 'ought' from 'is,' or the reliability of our moral judgments will find this book provocative and insightful.’ - Pekka Väyrynen, University of Leeds, UK

Aaron Zimmerman is an Associate Professor of Philosophy at the University California, Santa Barbara. His research is focused on the intersection between thought, language and reason and he writes and teaches on David Hume's philosophical work.

'Routledge's New Problems of Philosophy series has a most impressive line-up of topical volumes aimed at upper-level undergraduate and graduate students in philosophy and at others with interests in cutting edge philosophical work. The authors are influential figures in their respective fields and notably adept at synthesizing and explaining intricate topics fairly and comprehensively.' - John Heil, Monash University, Australia, and Washington University, St Louis, USA

'This is an outstanding collection of volumes. The topics are well chosen and the authors are outstanding. They will be fine texts in a wide range of courses.' - Stephen Stich, Rutgers University, USA

The New Problems of Philosophy series provides accessible and engaging surveys of the most important problems in contemporary philosophy. Each book examines a topic or theme that has emerged on the philosophical landscape in recent years, or that is a longstanding problem refreshed in light of recent work in philosophy and related disciplines. Clearly explaining the nature of the problem at hand and assessing attempts to answer it, books in the series are excellent starting-points for undergraduate and graduate students wishing to study a single topic in depth. They will also be essential reading for professional philosophers. Additional features include chapter summaries, further reading, and a glossary of technical terms.