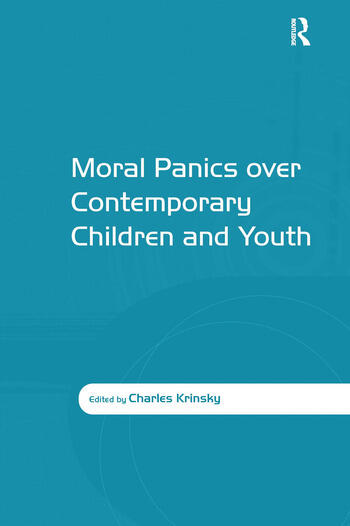 The concept of moral panic has received considerable scholarly attention, but as yet little attention has been accorded to panics over children and youth. This is the first book to examine this important and controversial social issue by employing a rigorous intellectual framework to explore the cultural construction of youth, through the dissemination of moral panics. It is accessible in manner and makes use of the latest contemporary research by addressing some of the pressing recent concerns relating to children and youth, including cyber-related panics, child abuse and pornography, education and crime. A truly international collection, this volume features new global research focusing on the United Kingdom, Australia, Canada, South Africa, and France as well as the United States. Genuinely multidisciplinary in approach, it will appeal to researchers and students across the social sciences and humanities - from sociology and social theory, to media, education, anthropology, criminology, geography and history.

Charles Krinsky has taught at the University of California, Irvine, the California State Polytechnic University, Pomona, and most recently the College of Professional Studies of Northeastern University in Boston, Massachusetts.

'Drawing on studies in a number of countries, using a critical and interdisciplinary perspective, and applying a fresh analytical examination, Moral Panics Over Contemporary Children and Youth...presents plentiful data, offering a uniquely fascinating, innovative and challenging social and cultural kaleidoscope of essential information. The exceptional focus of this book makes its reading intrinsically rewarding and promises a most valuable, positive and beneficial learning experience. A genuine must read for anyone interested in youth and moral panics.' Nachman Ben-Yehuda, Hebrew University of Jerusalem, Israel 'Moral Panics over Contemporary Children and Youth is exceptionally well set out, and the exemplary organization of this collection reflects some of the major topics currently under discussion by social researchers...In his Introduction, Charles Krinsky cites Stanley Cohen’s comment that Studying [moral panics] is easy and a lot of fun (1972, xxxv), and notes that Moral Panics over Contemporary Children and Youth aims to be readable, informative, useful, and enjoyable. Krinsky and his contributing authors have succeeded handsomely here.' Media/Culture Reviews '...this book contains a number of thought provoking and interesting chapters and would serve as an excellent starting point for anyone interested in contemporary moral panics about youth.' International Journal of Children’s Rights 'Moral Panics over Contemporary Children and Youth is a "must-read" for those who are interested in moral panics and the treatment of "modern-day folk devils". It would make a fresh addition to reading lists for modules on crime, media, culture, childhood and youth.' Media Culture and Society ’What is particularly nice about this book is that its contributors hail from a variety of disciplines, including sociology, anthropology, geography, communications, comparative culture, media and culture studies and history. So although the work stems from engaging trad