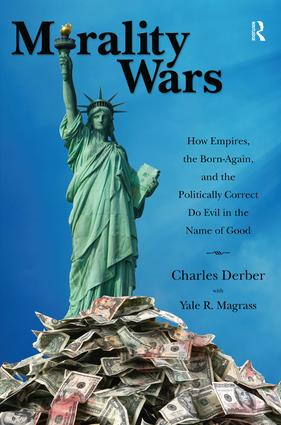 How Empires, the Born Again, and the Politically Correct Do Evil in the Name of Good, 1st Edition

Is patriotism a good thing in an empire? Did General Petraeus betray us or did Moveon? Does morality often serve immoral purposes? Morality Wars shows us how to understand the subtext of these questions and of all the debates about moral values and liberal versus conservative ideology. Derber and Magrass show that the moral problem today is not just lying but "immoral morality," doing evil in the name of good (e.g., Bush preemptively invading Iraq to spread liberty). The authors explore three ancient codes of immoral morality frighteningly resurrected in America today -those of empire, the politically correct, and the born again. Although the right today has recrafted historic arguments that empires bring peace, and fundamentalists battle moral decay, the authors show the Democratic Party and the left have their own IM, with Democrats supporting empire and the left its own political correctness. America's political divide today is a backlash to the progressive revolution of the 1960s and 1970s-secular, antiwar, and feminist-that created a radical break from traditional values and set the stage for current morality wars. In the spirit of de Tocqueville, this powerful book offers a rich and vivid portrait of America's political landscape, exploring ideas that can help move the nation to a new morality and politics.

“This incisive critical analysis of Western imperial history, and the ‘immoral morality’ contrived to justify its exploits, captures essential features of the great hegemonic powers from Rome to modern America, with many surprising revelations and insights, conveying lessons that we overlook at our peril. Once I began reading, I found this book hard to put down.”

“This is an up-to-the-present history of the kind of intentions that pave the road to hell: the road we are on. Leaders have long mobilized support for war and empire by rhetorical appeals to morality, idealism and God. This book traces the lineage of such moralism—from Rome to the British Empire to America's own history—and offers a clear-eyed, disturbing view of how American leaders today use such "immoral morality" to pursue policies with devastating effects for the U.S and the world.”

—Daniel Ellsberg, author of Secrets: A Memoir of Vietnam and the Pentagon Papers

“A trenchant and timely book on how power is wielded and moralized in America.”

“In clear and passionate prose, Derber and Magrass argues that immoral morality—the way leaders use moral values and their faith in God to justify empire, war, and exploitation—has reached a new peak in the United States. Whether Democrats or Republicans control the White House, Derber and Magrass's book offers an indispensable guide to unpicking the pious claims that mask policies of profit for the few and global domination over the many.”

—Jonathan Steele, The Guardian and author of Defeat: Why America and Britain lost Iraq

“Charles Derber is one of our most astute and eloquent social critics. … His political analysis is persuasive and is enlivened by graceful prose.”