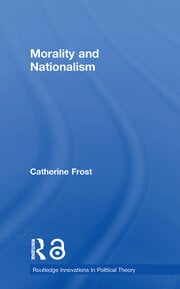 This book takes a unique approach to explore the moral foundations of nationalism.

Drawing on nationalist writings and examining almost 200 years of nationalism in Ireland and Quebec, the author develops a theory of nationalism based on its role in representation.

The study of nationalism has tended towards the construction of dichotomies – arguing, for example, that there are political and cultural, or civic and ethnic, versions of the phenomenon. However, as an object of moral scrutiny this bifurcation makes nationalism difficult to work with.

The author draws on primary sources to see how nationalists themselves argued for their cause and examines almost two hundred years of nationalism in two well-known cases, Ireland and Quebec. The author identifies which themes, if any, are common across the various forms that nationalism can take and then goes on to develop a theory of nationalism based on its role in representation. This representation-based approach provides both a basis for the moral claim of nationalism while at the same time identifying grounds on which this claim can be evaluated and limited.

It will be of strong interest to political theorists, especially those working on nationalism, multiculturalism and minority rights. The special focus in the book on the Irish and Quebec cases also makes it relevant reading for specialists in these fields as well as for other area studies where nationalism is an issue.