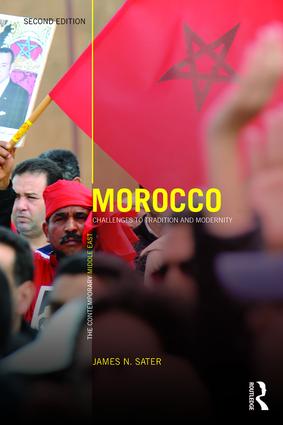 The first edition of Morocco was published one year before the mass protests of the Arab Spring rocked the Moroccan state. Post-Arab Spring, the country has a new constitution and government, but the state remains uncompromising on any true reform of the monarchy’s claims to power.

This new edition provides an introductory overview of the history, contemporary politics, economy, and international relations in Morocco and offers an examination of the challenges to tradition and modernity in the post-colonial state. It has been revised and updated to include analysis of the country’s evolving politics in the years following the Arab Spring, and the consequences this has had for the country’s traditional monarchy. It pays particular attention to the new constitution, the policies of the new Islamist-led government, and it includes an analysis of Morocco’s foreign policy in the post-Arab Spring regional context. Drawing on key academic texts, the author provides a detailed analysis of Morocco, focusing on issues such as:

• Morocco’s role within the region

• Ways of dealing with Political Islam

• The extent to which European influence has affected Moroccan society

Easily accessible to non-specialists, practitioners, and upper level undergraduate students, the book will be essential reading for those working in the fields of North African studies, International Relations and Middle East studies.

3. The Politics of Exclusion and Inclusion

4. The Challenge of Economic Development

James N. Sater is Associate Professor of Political Science at the International Studies Department of the American University of Sharjah in the United Arab Emirates. He spent more than four years in Morocco, where he worked and taught at Al Akhawayn University in Ifrane. He is the author of Civil Society and Political Change in Morocco (Routledge, 2007), and his research focuses on political transformation, elections, citizenship and migration.

The Contemporary Middle East Series provides the first systematic attempt at studying the key actors of the dynamic, complex and strategically important MENA region, employing an innovative common format which in each case study provides an easily-digestible analysis of the origins of the state, its contemporary politics, economics and international relations.