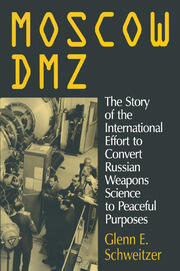 As the Soviet Union was collapsing in late 1991, reports began to reach the West about agents "shopping" for weapons systems - and weapons scientists - in the beleaguered Soviet military-industrial complex. In response, the United States, the European Community, and Japan, in cooperation with the Russian government, created a program to reemploy Soviet scientific personnel in civilian projects dealing with the legacy of the Soviet system - a polluted environment, unsafe nuclear power facilities, and economic underdevelopment. In this fascinating first-person account, the American environmental scientist who led the effort to establish the International Science and Technology Center in Moscow tells the diplomatic, scientific, and human story behind a remarkable post-Cold War conversion initiative.

Politics, Power, and Policy Making opens a window on the changing dynamics of American politics in the tumultuous 1990s, from the Clinton inauguration in January 1993 through the Republican revolution of 1995 and the 1996 presidential race. The book brings the legislative process to life by tracking a single controversial policy issue through the system, effectively linking public policy studies with the study of American political institutions. In the classroom, this book transcends the limitations of "a bill becomes a law, " affording students a more complex perspective on: the domestic policy-making process in action; power politics and the role of interest groups, the media, and public opinion; the impact of elections and the apparent shift of policy initiative from the executive branch to Congress in November 1994; the dynamics of federalism and the "devolution" revolution: How real is it? the persistence of divided government and gridlock: Is this what Americans really want?