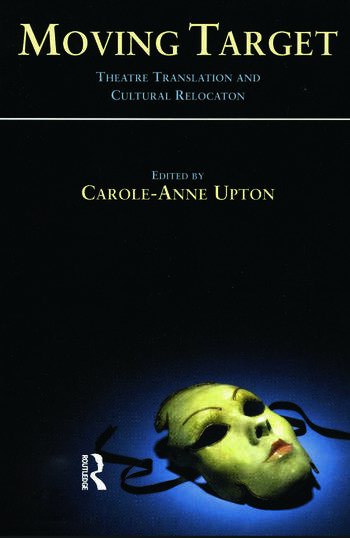 Moving Target offers a rigorous exploration of the practice of translating for the theatre. The twelve essays in the volume span a range of work from Eastern and Western Europe, Canada and the United States. For the first time, this book draws together existing translation theory with contemporary practice to shed light on a hitherto neglected aspect of the production process. How does the theatre translator mediate between source text, performance text and target audience? What happens when theatre is transposed from one culture to another? What are the obstacles to theatre translation, and what are the opportunities?

Central to the debate throughout is the role of the translator in creating not only a linguistic text but also a performance text, as the contributors repeatedly demonstrate an illuminating sensibility to the demands and potential of theatre production. Impacting upon areas of (inter)cultural theory as well as theatre studies and translation studies, the result is a startling revelation of the joys, as well as the frustrations of the dramatic art of the translator for performance.

Tradaptation: Cultural exchange and black British theatre, Derrick Cameron, pp 17-24
With reference to the practice of integrated casting, the re-workings of Synge and Chekhov by the Trinidadian playwright Mustapha Matura and the concept of 'tradaptation' (translation-adaptation) outlined by Asian theatre director Jatinder Verma, this essay challenges some of the traditional premises of cultural exchange in Euro-American theatre. The black and Asian diasporas' re-working and re-imagining of the West, and their place within it, re-fashions the Euro-American cultures' self-image - as well as staking a claim to a reversal of that cultural exchange which insists upon the reification of Western theatre as the pinnacle of theatrical expression.

Scottish Horses and Montreal Trains: The translation of vernacular to vernacular, Martin Bowman, pp 25-33
The subject is the translation of plays from one vernacular language to another. To what extent does the power of a vernacular language to suggest a specific culture inevitably situate the play in the milieu of the translation rather than in that of the original? What are the strategies that translators can use to ensure that their version avoids adaptation and remains firmly embedded in the original setting and culture? Is there inevitably a loss of original colour in the translated work? Other topics addressed include the translation of idiomatic expressions, the use of local details, and the question of cultural differences. The author draws upon his experiences as co-translator with Bill Findlay of Quebec plays into Scots and recent co-translation with Wajdi Mouawad of the dramatization of Irvine Welsh's 'Trainspotting' for production in Montreal.

Translating Standard into Dialect: Missing the Target?, Bill Findlay, pp 35-46
Martin Bowman's Scottish co-translator presents a complementary and controversial essay developing a long-term exploration of dialect translation, a process about which relatively little has hitherto been written. This essay offers a range of rare insights into the translator's motivation and method in rendering a contemporary play in standard French - Raymond Cousse's 'Enfantillages' - into Scots dialect. Such apparently 'asymmetric' translation raises questions regarding the integrity of both the source and target text, particularly in relation to dialect and social class, and dialect and performance.

Performability in Translation: Speakability? Playability? Or just saleability?, Eva Espasa, pp 49-62
This essay examines the changing notion of performability in stage translation, a concept which is analysed from textual, theatrical, and ideological perspectives. From a textual point of view, performability is often equated with 'speakability' or 'breathability', i.e. the ability to produce fluid texts which performers may utter without difficulty. From a theatrical viewpoint, the need or will to appeal to audiences usually involves a tension between foreignization and domestication. Such decisions find their way into performance as textual strategies (e.g. dialect) or audio-visual signs (e.g. body language, design, sound, and music). Performability is also determined by the theatrical ideology of the company, and is related to questions of status. Performability involves negotiation, but should not be rejected as a concept. Rather, the essay seeks to place theatre ideology and power negotiation at the heart of performability, and make speakability and breathability relative to it.

Acts with Words: Beckett, translation, mise en scène and authorship, Mark Batty, pp 63-72
Issues of written text translation as an act of destruction or preservation are considered as mirroring issues raised in the construction of a performance 'text', taking into account the roles of director, designers and actors in positioning the dramatic text within a proposed mise en scène. An analysis is offered of how the two processes, both involved with the construction of signifying systems for the stage, may be allowed to inform one another, specifically in considering the authorship of a performance from or through a dramatic piece of writing. References are to the stage work of Samuel Beckett, his collaborators, translators, interpreters and defenders, including the attitudes of the author and his estate to the 'manipulation' or 'abuse' of his work in a variety of cultural contexts.

'Priest' from Screen to Stage: An adaptation of Jimmy McGovern's screenplay, Lindsay Bell, pp 73-83
This essay offers an examination of the adaptation process begun after writing, workshopping and producing a stage adaptation of 'Priest' at the University of Alberta in 1996. Aspects of the adaptation/relocation process immediately raise parallels with translation theory: questions of (film-theatre) equivalences; finding solutions to adapting filmic structure and treatment of events into theatrical conventions and narrative techniques; transposition versus adaptation/adoption; justification of artistic/aesthetic choices - the screenwriter's versus the adapter's; freedom to create versus the integrity of the original source; and the issue of ownership. The essay presents an analysis of the challenges and solutions that were discovered in the process, and offers an opportunity for further discussion in applying translation theory to this adaptation process.

Valle-Inclán: The meaning of form, David Johnston, pp 85-99
This essay draws upon the experience of writing versions of three plays by Ramon del Valle-Inclán for very different productions on stage and radio: 'Bohemian Lights', 'The Barbarous Comedies', and 'Divine Words'. It considers decisions taken at verbal level to accommodate the demands of different production styles. More importantly, it examines strategies used in all three adaptations and productions, chiefly of radical relocation to an Irish milieu, to re-create the form and impact of Valle's highly distinctive 'esperpento' form. The conclusion is that while verbal adequacy and theatrical appropriateness are at odds, it is still possible across a variety of productions to remain faithful to the spirit and form of Valle's innovative and eminently challenging vision, through a process of 'transubstantiation'.

Performing Voices: Translation and Hélène Cixous, Kate Cameron, pp 101-112
A sense of ownership of the written word is diffuse in theatre, and giving voice to others may literally mean letting the performers put the text into their own words through devising or improvisation. Many involved in contemporary performance practice argue that the very notion of a playwright or script is redundant, since it prioritizes word over body, text over visual, written over spoken. In this context, the dramatic and theoretical work of Hélène Cixous is examined, with the suggestion that the emancipated voice in performance represents a feminine counter to the masculine tradition of (written) literature. Voice and song are key concepts; the idea is that speech is closer to the unconscious than writing and in theatre creates a liberating force within a political agenda. In following an improvisational strategy, the translator is therefore mediator not just of the musicality of the text, but also of the political agenda behind it.

Getting the Word Out: Issues in the translation of Latin American theatre for US audiences, Kirsten Nigro, pp 115-125
While Latin American theatre has gained increased attention in the English-speaking world in the last few decades, it is still essentially absent from stages in the United States. The reasons for this are many and complex, not least among them that not enough valuable, stageworthy plays are translated, despite the existence of various festivals dedicated to Latin American theatre, a few theatres dedicated to promoting Spanish-English bilingual theatre, and growing academic interest in the subject. Important topics considered here include: reasons for the marginalization of Latin American theatre; cultural and linguistic challenges in translating it for US audiences; the role of the translator as cultural mediator; issues of majority and minority cultures, mainstream and Hispanic stages; 'political correctness' as an inhibiting factor; and the need for translations to be workshopped. Cultural bias is something to be overcome, and this translator is reluctant to relocate on the grounds that this encourages the marginalization of Latin-American theatre.

The Irrepressible in Pursuit of the Impossible: Translating the theatre of the GDR, Anthony Meech, pp 127-137
This study of the uniquely significant role played by the theatre of the German Democratic Republic during the forty years of that state's existence attempts to identify how the translation and adaptation strategies adopted by GDR theatre writers and practitioners informed their theatre practice. Relocation in particular was a vital technique for defeating the censors. The essay considers whether the particular qualities of the drama of the GDR might be rendered intelligible to a West-European democratic audience. The conclusion reached is that, if such translation were possible, it might aid not only the understanding of the potential of theatre in a totalitarian state, but also offer a stimulus to theatre to better define its role in a democracy.

Translating the Untranslatable: Edward Redlinski's 'Cud Na Greenpoincie' ['Greenpoint Miracle'] in English, Klaudyna Rozhin, pp 139-149
This translator/director discusses the difficulties of drama translation from Polish into English, taking as an example her translation of Edward Redli½ski's 'Greenpoint Miracle'. The essay focuses on realia and cultural context; describes possible strategies for dealing with such problems and analyzes the strategy finally adopted. She also introduces a notion of concepts and argues whether these are what make Polish drama untranslatable. Lastly, she considers a specific problem encountered while translating 'Greenpoint Miracle': the problem of dialect. She presents her attempts to preserve it in production, so avoiding cultural relocation, and demonstrates to what extent they were successful.

A Samovar is a Samovar is a Samovar: Hopes and failures of the author as the object and subject of translation, András Nagy, pp 151-158
The contention here is that the relocation of language involves the fragmentation of the entire play. From his unique perspective as translated playwright as well as director/adapter of plays, Nagy first explores the translational processes of adaptation, interpretation, paraphrasing, contemporization, and most importantly, understanding, that combine to create meaning in the theatre. He assesses theatrical attempts to cross the cultural frontier that still encloses Eastern Europe. Discovering, in an attempt to 'transplant' 'Three Sisters' to Hungarian soil, that Chekhov's samovar is a unique and untranslatable cultural phenomenon, he draws a parallel with the role and significance of the whole cultural-historical-spiritual milieu of Hungary, closed behind linguistic and historical barriers. Drawing on this experience and his stage adaptations of 'King Lear', 'Anna Karenina', and Kierkegaard's 'The Seducer's Diary', he concludes that it is holistic context rather than discrete text that poses the real challenge to the translator for performance.