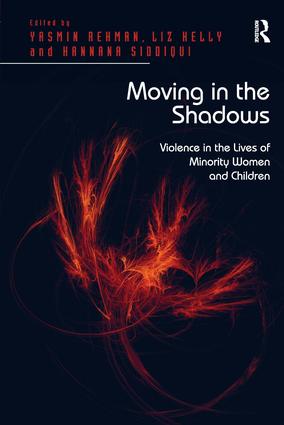 Moving in the Shadows

Violence in the Lives of Minority Women and Children, 1st Edition

In the UK the number of people who came from a minority ethnic group grew by 53 per cent between 1991 and 2001, from 3.0 million in 1991 to 4.6 million in 2001. Whilst much has been written about the impact of these demographic changes in relation to policy issues, black and minority women and children remain under-researched. Recent publications have tended to focus on South Asian women, forced marriage and 'honour' related violence. Moving in the Shadows brings together for the first time in a single volume, an examination of violence against women and children within the diverse communities of the UK. Its strength lies in its gendered focus as well as its understanding of the need for an integrated approach to all forms of violence against women, whilst foregrounding the experiences of minority women, the communities they are part of, and the organizations which have advocated for their rights and given them voice. The chapters contained within this volume explore a set of core themes: the forms and contexts of violence minority women experience; the continuum of violence; the role of culture and faith in the control of women and girls; the types of intervention within multi-cultural and social cohesion policies; the impacts of violence on British-born and migrant women and girls; and the intersection of race, class, gender and sexuality highlighting issues of similarity and difference. Taken together, they provide a valuable resource for scholars, students, activists, social workers and policy-makers working in the field.

'This wide-ranging collection sensitively and expertly engages with and illuminates the fraught dilemmas at the intersection of gender, violence and religion that have become so important for both practice and theory.’ Sylvia Walby, Lancaster University, UK 'This book makes an important contribution to the body of knowledge on various cases of violence against black and minorities women in the UK and feminist activist responses and interventions to them. It includes contributions by some of the most important activists in the field and uses the cutting edge theoretical framing of Intersectionality and situated gaze feminist theories and the construction of violence against women as a continuum.’ Nira Yuval-Davis, University of East London, UK 'Collectively, Yasmin Rehman, Liz Kelly and Hannana Siddiqui have over 90 years experience of working on violence against women issues… In this book, the trio have successfully brought together contributions from an impressive list of activists and researchers. The result is a volume of work which seeks to enhance the reader’s understanding of key issues affecting Minority women and children experiencing violence within diverse communities within the UK… Overall, the book explores a number of core themes including the different kinds and forms of violence experienced by minority women; the continuum of violence; the role of faith, gender and communities in controlling women and girls and the intersection of race, class, gender and sexuality. Most importantly, the book provides suggestions for positive change to the lives of Minority women and children in the UK… The Publicity material for the book states that it provides a valuable resource for scholars, activists, social workers and policy makers. I would go further and say that this book should be read by every politician, police officer and judge as this will greatly assist in saving lives and creating justice.' The Source: the Women’s Resource Centre Newslet