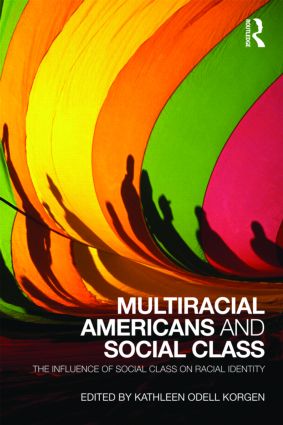 The Influence of Social Class on Racial Identity, 1st Edition

Multiracial Americans and Social Class is a key text for undergraduate and postgraduate students, researchers, and academics in the fields of sociology, race and ethnic studies, social stratification, race relations, and cultural studies.

'As discussions of the racial and ethnic terrain of the United States shift once more, Kathleen Odell Korgen and her co-contributors offer rich and transformative analysis about the profound implications of multiraciality on social class as well as individual and group identity formation. Multiracial Americans and Social Class reminds us that racial identification often hinges on access to economic as well as social and cultural capital. The questions raised in this exciting new volume will not only force a re-emergence of discourse on the politics and potential pitfalls of multiracial identification, but will also challenge researchers, community members, and students to address how white supremacy remains a powerful determinant of inequality. It should be required reading for anyone who is serious about addressing socio-economic disparities, public policy, and issues of social justice. This book will become an instant classic.'- Andrew Jolivette, Associate Professor American Indian Studies, San Francisco State University US, and author of Louisiana Creoles: Cultural Recovery and Mixed Race Native American Identity

'Multiracial Americans and Social Class is evidence that multiracial studies has emerged as a field that both draws from and enriches multiple disciplines. Kathleen Korgen has assembled a smart array of foundational and newer scholars who take on the complexity of race, multiraciality, and social class in fresh ways.' - Kristen Renn, Associate Professor of Higher, Adult and Lifelong Education, Michigan State University US

'Research on multiraciality has increased exponentially since the groundbreaking books by Paul Spickard (1989) and Maria Root (1992, 1996). Yet this analytically penetrating collection is the first systematic examination of social class in terms of the topic. It is an invaluable addition to the ever-growing literature on multiraciality and racial/class analyses more generally.' - G. Reginald Daniel, University of California, Santa Barbara US, and author of Race and Multiraciality in Brazil and the United States: Converging Paths?

'Multiracial Americans and Social Class is a tour guide of sorts through difficult questions that have plagued research on multiracial identity, multiracial politics, and the multiracial movement… [A] theoretical scaffolding needed to understand these issues flows through this collection of cutting-edge research.' - From the Foreword by David Brunsma

Kathleen Odell Korgen is Professor of Sociology at William Paterson University, Wayne, NJ. She is the author of Crossing the Racial Divide: Close Friendships between Black and White Americans (2002) and From Black to Biracial: Transforming Racial Identity among Americans (1998, 1999). She is also the co-author and editor of The Engaged Sociologist: Connecting the Classroom to the Community (2010) and Contemporary Readings in Sociology (2008).