Mummies, Cannibals and Vampires
The History of Corpse Medicine from the Renaissance to the Victorians 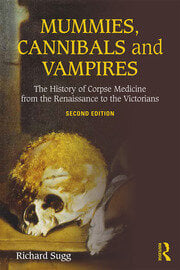 Mummies, Cannibals and Vampires: The History of Corpse Medicine from the Renaissance to the Victorians

Mummies, Cannibals and Vampires charts in vivid detail the largely forgotten history of European corpse medicine, which saw kings, ladies, gentlemen, priests and scientists prescribe, swallow or wear human blood, flesh, bone, fat, brains and skin in an attempt to heal themselves of epilepsy, bruising, wounds, sores, plague, cancer, gout and depression. In this comprehensive and accessible text, Richard Sugg shows that, far from being a medieval therapy, corpse medicine was at its height during the social and scientific revolutions of early-modern Britain, surviving well into the eighteenth century and, amongst the poor, lingering stubbornly on into the time of Queen Victoria.

Ranging from the execution scaffolds of Germany and Scandinavia, through the courts and laboratories of Italy, France and Britain, to the battlefields of Holland and Ireland, and on to the tribal man-eating of the Americas, Mummies, Cannibals and Vampires argues that the real cannibals were in fact the Europeans. Picking our way through the bloodstained shadows of this remarkable secret history, we encounter medicine cut from bodies living and dead, sacks of human fat harvested after a gun battle, gloves made of human skin, and the first mummy to appear on the London stage. Lit by the uncanny glow of a lamp filled with human blood, this second edition includes new material on exo-cannibalism, skull medicine, the blood-drinking of Scandinavian executions, Victorian corpse-stroking, and the magical powers of candles made from human fat. In our quest to understand the strange paradox of routine Christian cannibalism we move from the Catholic vampirism of the Eucharist, through the routine filth and discomfort of early modern bodies, and in to the potent, numinous source of corpse medicine’s ultimate power: the human soul itself.

Now accompanied by a companion website with supplementary articles, interviews with the author, related images, summaries of key topics, and a glossary, the second edition of Mummies, Cannibals and Vampires is an essential read for anyone interested in the history of medicine, early modern history, and the darker, hidden past of European Christendom.

is lecturer in Renaissance Literature at the University of Durham. His previous publications include: John Donne (Palgrave, 2007), Murder After Death (Cornell, 2007), The Smoke of the Soul (Palgrave, 2013), and The Secret History of the Soul (Cambridge Scholars, 2013). He has just completed his sixth book, The Real Vampires.

Praise of this edition:

"Richard Sugg’s excellent book opens up a lost world of magic and medicine. This rich and authoritative account of beliefs about the medical efficacy of dead bodies is a fascinating, if gruesome, eye-opener."
John Henry, University of Edinburgh, UK

"Richard Sugg has written a thorough and engaging examination of pre-modern corpse medicine, paying special attention to literary and cultural history. The new edition with its expanded online content makes this book equally appealing to advanced scholars and students of history, medicine, and literature. It is an excellent edition for graduate and undergraduate classroom use."
Miriam Jacobson, University of Georgia, USA

"Richard Sugg’s book Mummies, Cannibals, and Vampires is valuable to both survey student and specialist alike.  The book’s breadth, from Renaissance to Victorian society, is impressive but it is the work’s macabre details which rivets readers to recorded medical uses of the human body."
Charles Levine, Mesa Community College, USA

Praise of the previous edition:

'This book is full of rich detail, making you both recoil and yet read on, fascinated by our ancestors’ imaginative ways to try and heal the sick. ' – Cotswold History Blog

"I do not write this lightly - Mummies, Cannibals and Vampires: the History of Corpse Medicine from the Renaissance to the Victorians is one of the most eye-opening and phenomenal books I have ever read. It is incredibly well researched, well written and states the case of medicinal cannibalism throughout the ages with great detail and reference. There is no other book like it and I feel so fortunate to have it upon my shelf...It would be a fantastic book to accompany a college class of the same subject." - Amazon.com Customer Review, 5 Stars

"Sugg's book offers itself as a 'history' of corpse medicine. Though it is the work of a well-known literary scholar, Mummies, Cannibals and Vampires invokes imaginative writing only to augment the evidence it draws from medical and scientific texts... Sugg's interest in corpse medicine reaches well beyond mumia to inspect all those strange concoctions of human tissue and waste favoured by early modern pharmacology"– Michael Neill, London Review of Books.