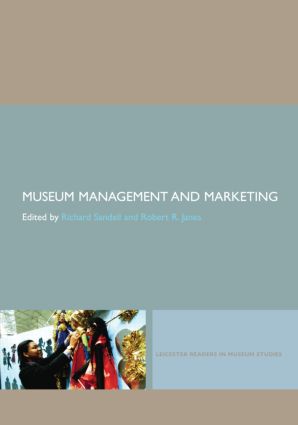 Drawing together a selection of high quality, intellectually robust and stimulating articles on both theoretical and practice-based developments in the field, this Reader investigates the closely linked areas of management and marketing in the museum.

The articles, from established and world-renowned contributors, practitioners and writers at the leading edge of their fields, deal with the museum context of management and how marketing and management practices must take account of the specifics of the museum and the not-for-profit ethos.

Key writings from broader literature are included, and the collection of key writings on the investigation and study of management and marketing in the museum are of great benefit not only to those studying the subject, but also to professionals working and developing within the field.

'This excellent book provides museum professionals with a highly nuanced view of its subject.' - Museum Practice

Richard Sandell is Head of the Department of Museum Studies at the University of Leicester. His research interests focus on the evolving social purposes, roles and agency of museums. His recent publications include Museums, Society, Inequality (2002).

Robert R. Janes is the former President and CEO of the Glenbow Museum in Calgary, Canada. He is Editor-in-Chief of the Journal of Museum Management and Curatorship and a museum consultant. His recent books include Museums and the Paradox of Change (1997) and Looking Reality in the Eye: Museums and Social Responsibility (2005).

Leicester Readers in Museum Studies was launched in 1994 under the editorship of Professor Susan Pearce, the then Head of the Department of Museum Studies. Having continuously developed subject bibliographies since its founding in 1966, in the late 1980s the Department converted these into study packs of published materials for students. These became the basis of the first series of Readers. It was determined that each volume should have a strong editorial vision which would be expressed in a significant introductory essay and in section introductions. Professor Eilean Hooper-Greenhill followed Sue Pearce as series editor. In 2007, Simon Knell became editor of a newly designed and more thematically diverse second series. He invited editors from outside the Leicester department.

Launched in 2019, the third series is focused on the publication of new - rather than previously published - material and with a renewed energy to reflect thought and practice globally. The series welcomes proposals from prospective editors, wherever they may be, who seek to meet the series’ objectives:

If you have an idea for a book that you think would be appropriate for the series, then please contact the Series Editor, Simon Knell ([email protected]), to discuss further.