Music Sociology
Examining the Role of Music in Social Life 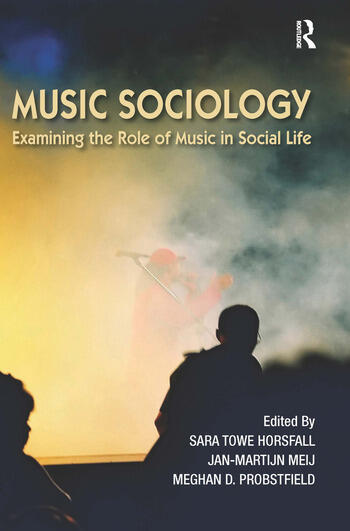 Music Sociology: Examining the Role of Music in Social Life

Music Sociology explores 16 different genres to demonstrate that music everywhere reflects social values, organisational processes, meanings and individual identity. Presenting original ethnographic research, the contributors use descriptions of subcultures to explain the concepts of music sociology, including the rituals that link people to music, the past and each other. Music Sociology introduces the sociology of music to those who may not be familiar with it and provides a basic historical perspective on popular music in America and beyond.

I. What Is Sociology of Music Chapter 1: Here I Stand by Paul Robeson Chapter 2: Five Important Moments in America's Musical History-The Rest of the Story by Sara Towe Horsfall Chapter 3: What Is Sociological about Music by Will Roy and Tim Dowd Chapter 4: American Song by Howard Becker II. Identity and the Experience of Music Chapter 5: Music as Ritual: A Hotline to the Collective Conscious by Sara Towe Horsfall Chapter 6: Moving Past Violence and Vulgarity: Structural Ritualization and Constructed Meaning in Heavy Metal Subculture by Jan-Martijn Meij, Meghan D.Probstfield, Joseph M Simpson, J. David Knottnerus Chapter 7: Authenticity in Latino Music: Scenes of Place by Kathryn M. Nowtny, Jennifer L. Fackler, Gianncarlo Muschi, Carol Vargas, Lindsey Wilson, Joseph A. Kotarba Chapter 8: Ritualistic and Pure Soloing by Roscoe C. Scarborough III. Music and Stratification Chapter 9: Race by Russell A. Potter Chapter 10: (Re)Presentin' the Tragic Mulatto: An Analysis of Multiracial Identity in Rap Music by Matt Oware Chapter 11: Skinhead Identity Contested: Ska Music, Racism, and Youth Culture by Daniel Sarabia Chapter 12: Lowbrow Entertainment to Highbrow Art Form: The Case of Jazz and Heavy Metal by Roscoe C. Scarborough Chapter 13: It Is What It Is: Race, Gender, and Privilege in Hip Hop DJ Culture by Michael Barnes IV. Music and Subcultures Chapter 14: Sect (From Jazz: Myth and Religion) by Neil Leonard Chapter 15: Hardcore: An Ethnographic Study of an Evolving Music Subculture by Kerry Hendricks Chapter 16: Not Fade Away: Ritual Solidarity and Persistence in the Jamband Community by Pam Hunt Chapter 17: Taqwacore: An Introduction to Muslim American Punk Rock by Sarah S. Hosman V. Music as Social Change and Commentary Chapter 18: Hitler, the Holocaust, and Heavy Metal Music: Holocaust Memory and Representation in the Heavy Metal Subculture1980-Present by Mark Mengerink Chapter 19: Painful Listening: The Musical Noise and Cultural Transcendence of Southern Italian Tarantism by Lee Blackstone Chapter 20: An International Comparison of the Politics of Straight Edge by William Tsitsos Chapter 21: Sing Out: Collective Singing Rituals of Folk Protest Music in US Social Movements by Jeneve Brooks VI. Commodification of Music Chapter 22: The Industrialization of Popular Music by Simon Frith Chapter 23: Authenticity and Independence in Rap Music and Other Genre Communities by Jennifer C. Lena Chapter 24: A Piece of Art Is Not a Loaf of Bread: Indie Rock's Challenge to Commodification by Jeffrey Nathanial Parker Chapter 25: Operating Outside of the Music Industry: Strategies of Production in a Semi-Professional Musical Art World by Diana Miller Chapter 26: Why Pay for Music? How College Students Rationalize Illegal Downloading by Jason S. Ulsperberger, Kristin Ulsperberger, and Stan H. Hodges.

“This book yields many thoughtful ideas and findings about music in the Americas, and is worth study by students and music lovers. Summing Up: Highly recommended.” –CHOICE

“I think this is a wonderful book and a valuable tool for anyone interested in understanding the role of music in society.“
-Warren Waren, Texas A&M University