Music Writing Literature, from Sand via Debussy to Derrida 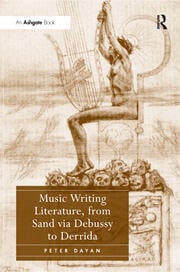 Music Writing Literature, from Sand via Debussy to Derrida

Why does poetry appeal to music? Can music be said to communicate, as language does? What, between music and poetry, is it possible to translate? These fundamental questions have remained obstinately difficult, despite the recent burgeoning of word and music studies. Peter Dayan contends that the reasons for this difficulty were worked out with extraordinary rigour and consistency in a French literary tradition, echoed by composers such as Berlioz and Debussy, which stretches from Sand to Derrida. Their writing shows how it is both necessary and futile to look for music in poetry, or for poetry in music: necessary, because each art defines itself by reference to what it is not, and cannot be, in order to point to an idealized totality outside itself; futile, because the musicality of poetry, like the poetic meaning of music, must remain as elusive as that idealized totality; its distance is the very condition of the art. Thus is generated a subtle but unmistakable general definition of the nature of art which has proved uniquely able to survive all the probings of poststructuralism. That definition of art is inseparable from a disturbingly effective scepticism towards all forms of explication and explanation in critical discourse, so it is doubtless not surprising that critics in general have done their best to ignore it. But by bringing out what Sand, Baudelaire, Mallarmé, Proust, Debussy, Berlioz, Barthes, and Derrida all do in the same way as they work on the limits of the analogy between music and literature, this book shows how it is possible, productive, illuminating, and fascinating to work on those limits; though to do so, as we find repeatedly, in Chopin's dreams as in Derrida's 'tombeaux', requires us to have the courage to face, in music, our literal death, and the limits of our intelligence.

Contents: Foreword, with apologies; Translating the raindrop; A sermon on the violin; Baudelaire's Wagner: the indescribable, the untranslatable, the inaudible; Keeping the voice of the nightingale alive in the age of mechanical reproduction; On the evidence of Mallarmé's music; How music enables Proust to write paradise lost; 'Song must write': Roland Barthes's hallucinations; 'Sing me a song to make death tolerable': music in mourning for Derrida; Conclusion; Bibliography; Index.

Peter Dayan is Professor of Word and Music Studies, University of Edinburgh, UK.

’...[an] insightful addition to studies of the relationship between music and literature...’ Forum for Modern Languages ’... this challenging book marks a significant contribution to work on both the links between music and literature, and the paradoxes and complexities of French literary thought of the last 150 years.’ Modern Language Review 'This is a book to which I am sure that I will return to repeatedly. I have read it cover to cover twice now, both times enjoying it differently and finding more to marvel at... Peter Dayan is clearly an author who cares deeply about words, both for what they mean and for how they sound and read.' Music and Letters