Music and Orientalism in the British Empire, 1780s–1940s
Portrayal of the East 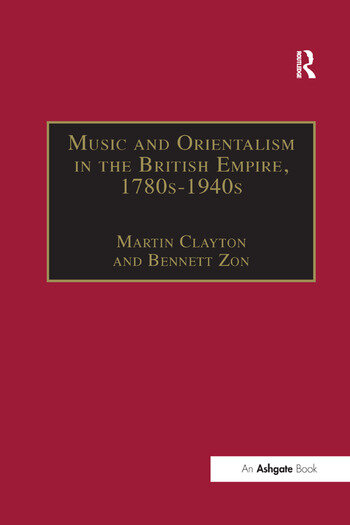 Music and Orientalism in the British Empire, 1780s–1940s: Portrayal of the East

Filling a significant gap in current scholarship, the fourteen original essays that make up this volume individually and collectively reflect on the relationship between music and Orientalism in the British Empire over the course of the long nineteenth century. The book is in four themed sections. 'Portrayal of the East' traces the routes from encounter to representation and restores the Orient to its rightful place in histories of Orientalism. 'Interpreting Concert Music' looks at one of the principal forms in which Orientalism could be brought to an eager and largely receptive - yet sometimes resistant - mass market. 'Words and Music' investigates the confluence of musical and Orientalist themes in different genres of writing, including criticism, fiction and travel writing. Finally, 'The Orientalist Stage' discusses crucial sites of Orientalist representation - music theatre and opera - as well as tracing similar phenomena in twentieth-century Hindi cinema. These final chapters examine the rendering of the East as 'unachievable and unrecognizable' for the consuming gaze of the western spectator.

'Martin Clayton and Bennett Zon’s anthology is a signal contribution to transcultural music studies in general and to the British postcolonial studies in particular. These studies range from Elgar to light musical theatre to film music, and indeed into travel literature and fiction also. The primary concern here is musical matters in the British Empire in the nineteenth and early twentieth centuries, with emphasis on India; the musical and critical disciplines will certainly benefit from this research because much of it is to this point unknown. This book will spark both debate and, I predict, inspire similar projects focusing on other countries'. Jonathan Bellman, University of Northern Colorado, USA. ’The essays dealing with British composers Edward Elgar and Granville Bantock and with orientalist music theatre and opera are ... valuable as empirical studies on little-researched topics or for bringing their subjects within the interpretive ambit of the collection's concerns.’ Victorian Studies