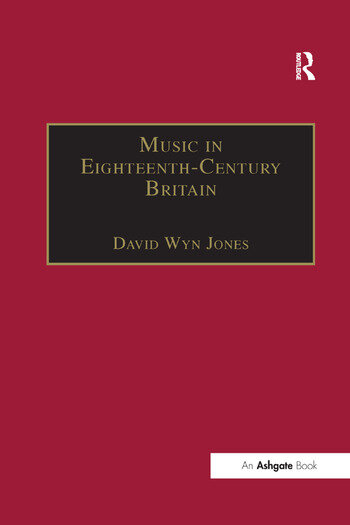 This collection of essays by some of the leading scholars in the field looks at various aspects of musical life in eighteenth-century Britain. The significant roles played by institutions such as the Freemasons and foreign embassy chapels in promoting music making and introducing foreign styles to English music are examined, as well as the influence exerted by individuals, both foreign and British. The book covers the spectrum of British music, both sacred and secular, and both cosmopolitan and provincial. In doing so it helps to redress the picture of eighteenth-century British music which has previously portrayed Handel and London as its primary constituents.

’...a good, down-to-earth book, full of essays that are readable and informative and don’t wander into fashionable highfalutin abstractions.’ Early Music Review ’A mountain of hard data dug up from archives is clearly presented. For those of us who could not attend, the access to scholars’ latest findings on this subject is much appreciated.’ International Record Review 'In addition to providing a great deal of material for reconceptualization, many valuable revelations and a bulk of information, this collective study has a strong methodological value. Many facets of eighteenth-century British musical life, disclosed in the twelve excellent essays, are quite typical for other peripheral countries, whether an advanced society like England or one only on its way to joining European society, like Russia. This book therefore offers a useful case study, presenting a sociological model of eighteenth-century European music and promoting our understanding of other cultures... All the essays challenge or revise more or less established views on one topic or another. They combine fascinating historical and biographical material with substantial research, supplemented by concrete information presented in valuable appendices.' Ad Parnassum '... much diligent and painstaking scholarship on subjects where there is still a great deal of undigested source material.' Albion '... a wealth of source materials and diverse range of topics for investigation about the musical life of a nation that most decidedly was a 'land with music'. Early Music