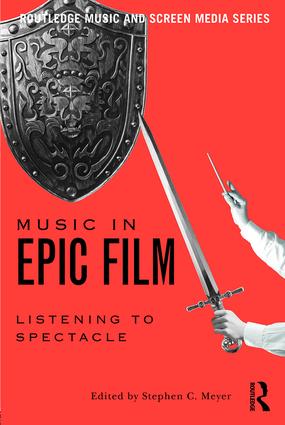 As both a distinct genre and a particular mode of filmmaking, the idea of the epic has been central to the history of cinema. Including contributions from both established and emerging film music scholars, the ten essays in Music in Epic Film: Listening to Spectacle provide a cross-section of contemporary scholarship on the subject. They explore diverse topics, including the function of music in epic narratives, the socio-political implications of cinematic music, and the use of pre-existing music in epic films. Intended for students and scholars in film music, film appreciation, and media studies, the wide range of topics and the diversity of the films that the authors discuss make Music in Epic Film: Listening to Spectacle an ideal introduction to the field of music in epic film.

Part I: Marketing and Production

1. Branding the Franchise: Music and the (Corporate) Myth of Origin James Buhler

2. Manufacturing the Epic Score: Hans Zimmer and the Sounds of Significance Frank Lehman

5. From Authenticity to Anachronism: Pre-Existing Music and "Epic Englishness" in Elizabeth and Master and Commander Alexandra Wilson

7. "The epic and intimately human": Contemplating Tara’s Theme in Gone With the Wind Nathan Platte

Part V: Genre and the (Anti-)Epic

9. Inverting the Epic: The Music of Ridley Scott’s Kingdom of Heaven Kirsten Yri

Stephen C. Meyer is Associate Professor of Musicology at the University of Cincinnati.