Music in the Collective Experience in Sixteenth-Century Milan 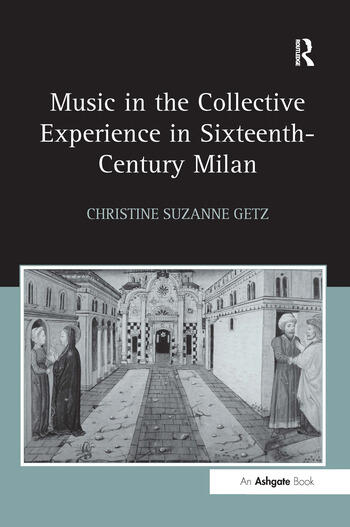 Music in the Collective Experience in Sixteenth-Century Milan

Renaissance music, like its sister arts, was most often experienced collectively. While it was possible to read Renaissance polyphony silently from a music manuscript or print, improvise alone, or perform as a soloist, the very practical nature of Renaissance music defied individualism. The reading and improvisation of polyphony was most frequently achieved through close co-operation, and this mutual endeavour extended beyond the musicians to include the society to which it is addressed. In sixteenth-century Milan, music, an art traditionally associated with the court and cathedral, came to be appropriated by the old nobility and the new aristocracy alike as a means of demonstrating social primacy and newly acquired wealth. As class mobility assumed greater significance in Milan and the size of the city expanded beyond its Medieval borders, music-making became ever more closely associated with public life. With its novel structures and diverse urban spaces, sixteenth-century Milan offered an unlimited variety of public performance arenas. The city's political and ecclesiastical authorities staged grand processions, church services, entertainments, and entries aimed at the propagation of both church and state. Yet the private citizen utilized such displays as well, creating his own miniature spectacle in a visual and an aural imitation of the ecclesiastical and political panoply of the age. Using archival documents, music prints, manuscripts and contemporary writing, Getz examines the musical culture of sixteenth-century Milan via its life within the city's most influential social institutions to show how fifteenth-century courtly traditions were adapted to the public arena. The book considers the relationship of the primary cappella musicale, including those of the Duomo, the court of Milan, Santa Maria della Scala, and Santa Maria presso San Celso, to the sixteenth-century institutions that housed them. In addition, the book investigates the musician's role as an actor and a functionary in the political, religious, and social spectacles produced by the Milanese church, state, and aristocracy within the city's diverse urban spaces. Furthermore, it establishes a context for the numerous motets, madrigals, and lute intabulations composed and printed in sixteenth-century Milan by examining their function within the urban milieu in which they were first performed. Finally, it musically documents Milan's transformation from a ducal state dominated by provincial traditions into a mercantile centre of international acclaim. Such an important study in Italian Renaissance music will therefore appeal to anyone interested in the culture of Renaissance Italy.

Contents: Preface; Forging a modern civic identity: music for the Battle of Pavia; From ducal to Gubernatorial ceremonial; The civic ceremonial at the Duomo of Milan; Music in the civic processions and triumphal progressions; Instrumental music and musicians under the early governors; The collective culture of secular song; Public devotion in post-Tridentine Milan; Appendices; Bibliography; Index.

Christine Suzanne Getz is Assistant Professor at the Department of Music, University of Iowa, USA.

’... a comprehensive view of music making in the region. Getz draws on much previously unknown archival material, as well as dicussing significant quantities of music, most of it unavailable in modern editions....much of the information she provides is extremely valuable, and some of it fascinating... Professional scholars of sixteenth-century music will find this book useful...' Notes ’Getz has presented an abundance of information on musical life in Milan; her work should serve as a helpful aid to further research.’ Renaissance Quarterly ’Through rich archival research, Getz succeeds in illuminating a diverse world... One of the strengths, and novelties, of this book is in its detailed reconstruction of the practical organization of musical institutions...’ Urban History ’In her valuable study of the diverse forms, genres and avenues for music, Christine Getz makes a broad survey of Milan's rich musical life... The book is generously stocked with musical examples and tables that list the contents of many of the printed musical anthologies and provide the names of singers and instrumentalists... useful as a reference guide to the musical life of Milan in the age of the Sforzas and Borromeo.’ Sixteenth Century Journal ’This is a useful book, with its principal strength in its wealth of material and the careful work and commitment that has gone into its pages... Christine Getz’s book will serve as an excellent source of material, providing an overview of the subject based on much original archival research.’ Music & Letters