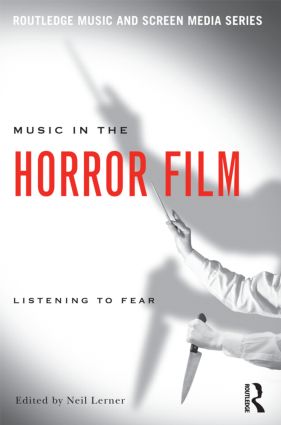 Music in the Horror Film

Music in Horror Film is a collection of essays that examine the effects of music and its ability to provoke or intensify fear in this particular genre of film. Frightening images and ideas can be made even more intense when accompanied with frightening musical sounds, and music in horror film frequently makes its audience feel threatened and uncomfortable through its sudden stinger chords and other shock effects. The essays in this collection address the presence of music in horror films and their potency within them. With contributions from scholars across the disciplines of music and film studies, these essays delve into blockbusters like The Exorcist, The Shining, and The Sixth Sense together with lesser known but still important films like Carnival of Souls and The Last House on the Left. By leading us with the ear to hear these films in new ways, these essays allow us to see horror films with fresh eyes.

Series Foreword Preface: What About Horror’s Ear? Acknowledgements 1. Carnival of Souls and the Organs of Horror Julie Brown 2. Mischief Afoot: Supernatural Horror-comedies and the Diabolus in Musica Janet K. Halfyard 3. The Monster and the Music Box: Children and the Soundtrack of Horror Stan Link 4 . The Strange Case of Rouben Mamoulian’s Sound Stew: The Uncanny Soundtrack in Dr. Jekyll and Mr. Hyde (1931) Neil Lerner 5. Voices that Lie Within: The Heard and Unheard in Psycho Ross Fenimore 6. Pop Goes the Horror Score: Left Alone in The Last House on the Left Joe Tompkins 7. Ramblin’ Men and Piano Men: Crises of Music and Masculinity in The Exorcist Claire Sisco King 8. Rehearing The Shining: Musical Undercurrents in the Overlook Hotel David Code 9. Hearing Deep Seated Fears: John Carpenter’s The Fog (1980) K. J. Donnelly 10. Music and the Adult Ideal in A Nightmare on Elm Street James Buhler 11. The Beauty of Horror: Kilar, Coppola, and Dracula James Deaville 12. Quieting the Ghosts in The Sixth Sense and The Others Lloyd Whitesell List of Contributors Index

Neil Lerner is Associate Professor of Music at Davidson College, with his Ph.D. in Musicology from Duke University. He has several published articles and numerous conference presentations to his credit, including co-authorship on our book with Joseph Straus, Sounding Off: Theorizing Disability in Music. Moreover, he is an active teacher of Film Music and carries a full load, teaching the curricula for general liberal arts students as well as required courses for music majors.