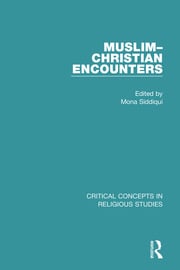 While the subject of Christian-Muslim or Muslim-Christian interaction is still not a traditional or systematic discipline, interest in the encounter of these two religions has grown considerably over the last decade. Historians, including historians of Islam and Christianity have always been interested in the civilizational meeting of the two religions, in conflict or in times of peace. This includes aspects of post-colonial studies, which incorporate cultural, literary and political writings which consider the intellectual and social ruptures in so much of the Islamic world in the 19th and 20th centuries.

Theologians however have only recently begin to appreciate the amount of material which illustrates the extent to which Christians and Muslims wrote about one another’s faith and spoke of each other in a variety of contexts in both polemical and eirenic terms. These resources serve to enrich the understanding of one’s own faith and the changing historical relationship with the other.

Today, Muslim-Christian is often understood as Islam/West where the Christianity and secularism are either conflated or Christianity subsumed within the larger cultural framework of the west. Either way, Islam is a foreign presence and its points of reference not easily assimilated in the narrative of a Judaeo-Christian West. Nevertheless this has created an interesting intellectual and scholarly dynamic in a wide range of disciplines. This includes ethics, politics, gender studies and the emergence of an `interfaith’ literature which is increasingly used in scholarly as well as grass roots settings.

The volumes will provide a unique and rich reflection of Muslim-Christian encounter. This work will introduce the scholar and the student to the variety of approaches people of faith/no faith have taken to thinking about the two religions. The volumes will cover doctrine, interfaith practice as theory and lived realities and philosophical and literary themes and approaches.