Muslims, Migration and Citizenship
Processes of Inclusion and Exclusion 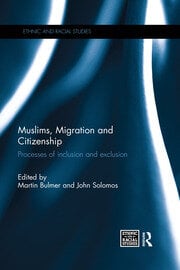 Muslims, Migration and Citizenship: Processes of Inclusion and Exclusion

Bringing together ten research based contributions, Muslims, Migration and Citizenship addresses questions about the changing experiences of Muslim communities, or specific groups within them, in various national and localised environments. Although not an exhaustive survey of the broad range of scholarly research in this evolving field, this book covers issues that are likely to be of some importance in the coming period. In particular, the contributors highlight the complexity of the experiences of Muslim communities in different national and cultural environments, and the evolution of both policy discourses and debates in civil society. This book was originally published as a special issue of Ethnic and Racial Studies.

1. Controversy, Islam and politics: an exploration of the ‘Innocence of Muslims’ affair through the eyes of British Muslim elites Chris Allen and Arshad Isakjee

4. Balancing agency, gender and race: how do Muslim female teenagers in Quebec negotiate the social meanings embedded in the hijab? Paul Eid

5. White privilege in the lives of Muslim converts in Britain Leon Moosavi

8. The ‘metropolis of dissent’: Muslim participation in Leicester and the ‘failure’ of multiculturalism in Britain Stephen H. Jones

9. Online Islamophobia and the politics of fear: manufacturing the green scare Mattias Ekman

10. Being Muslim and being Irish after 9/11: self-conceptions of place in Irish society Orla Lynch and Angela Veale

is Professor and Head of the Department of Sociology at the University of Warwick, UK. His most recent publications are Race, Multiculture and Social Policy (2013, with Alice Bloch and Sarah Neal) and Theories of Race and Ethnic Relations: Contemporary Debates and Perspectives (2015, with Karim Murji).