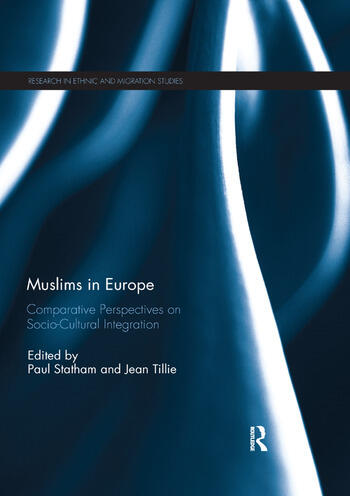 Atrocities by terrorists acting in the name of the ‘Islamic State’ are occurring with increasing regularity across Western Europe. Often the perpetrators are ‘home grown’, which places the relationship between Muslims and the countries in which they live under intense political and media scrutiny, and raises questions about the success of the integration of Muslims of migrant origin. At the same time, populist politicians try to shift the blame from the few perpetrators to the supposed characteristics of all Muslims as a ‘group’ by depicting Islam as a threat that seeks to undermine liberal democratic values and institutions.

The research in this volume attempts to redress the balance by focusing on the views and life experiences of the many ‘ordinary’ Muslims in their European societies of settlement, and the role that cultural and religious factors play in shaping their social relationships with majority populations and public institutions. The book is specifically interested in the relationship between cultural/religious distance and social factors that shape the life chances of Muslims relative to the majority. The study is cross-national, comparative across the six main receiving countries with distinct approaches to the accommodation of Muslims: France, Germany, Britain, the Netherlands, Belgium and Switzerland. The research is based on the findings of a survey of four groups of Muslims from distinct countries of origin: Turkey, Morocco, the former Yugoslavia, and Pakistan, as well as majority populations, in each of the receiving countries. This book was originally published as a special issue of the Journal of Ethnic and Migration Studies.

1. Muslims in their European societies of settlement: a comparative agenda for empirical research on socio-cultural integration across countries and groups Paul Statham and Jean Tillie

4. How crosscutting weak ties are established—the case of Muslims in Europe Alyt Damstra and Jean Tillie

7. Religious minorities and secularism: an alternative view of the impact of religion on the political values of Muslims in Europe Elisa Banfi, Matteo Gianni and Marco Giugni

8. Electoral participation of Muslims in Europe: assessing the impact of institutional and discursive opportunities Manlio Cinalli and Marco Giugni

Paul Statham is Professor of Migration and Director of the Sussex Centre for Migration Research in the School of Global Studies at the University of Sussex, UK.