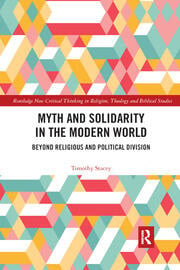 Myth and Solidarity in the Modern World: Beyond Religious and Political Division

In the context of the rise of reactionary politics across the globe, this book seeks new ways of developing solidarity across religious, political and economic differences. Drawing on an increasingly influential Christian theological movement, postliberalism, it claims that the dominance of liberal, secular rationality has blinded people to the fundamental role of transcendence and myth in developing solidarity. The result is either atrophy, or a retrenching in divisive myths of faith, race, nation or economic status.

Liberalism is now a dominant force across the globe. But its resonance in the Anglo-Saxon West, from which it originates and has been most fully realized, is relatively underexplored. The book thus follows two simultaneous lines of enquiry. Firstly, a genealogical study of social scientific and policy iterations of the relationship between belief and solidarity in the Anglo-Saxon West, placing postliberal theory into dialogue with the sociology and anthropology of religion, politics and economics. Secondly, it draws from original ethnographic research with groups in London, UK, that seek to develop solidarity in the face of deep-seated difference.

By bringing a new way of framing these contentious debates about contemporary society, this research offers tools for more productive conversations around religious and political topics, in particular concluding with a clear policy proposal. It is, therefore, a useful resource for both academics of theology and religious studies, political philosophy, sociology and anthropology; and for politicians, policy makers and practitioners hoping to develop solidarity in the modern world.

Timothy Stacey is a Postdoctoral Fellow at both the Religion and Diversity Project, University of Ottawa, Canada and the Faiths and Civil Society Unit, Goldsmiths, University of London, UK. He is interested in the role of religion and belief, or 'myth' as he prefers, in developing solidarity, with special attention to the implications for politics, public policy and practice. He has developed successful funding bids both internally and with a range of funders, including the AHRC.

'This book neatly juxtaposes the search for sources of solidarity in the West, not in a return to Christianity, as some have proposed, but in innovative movements and initiatives emerging out of a diversity of religion, belief and non-belief. The concept of myth is borrowed from religion and deployed in empirical investigations of both religious and non-religious settings. This opens up a valuable space for thinking again about categories and sources of solidarity in the public realm which for a while had gone missing, and will allow scholars, students and interested activists to think deeply about the possibilities.'

, Professor of Faith and Public Policy and Director of the Faiths and Civil Society Unit, Goldsmiths, University of London, UK

'This book addresses head-on the peculiar situation of the current west. We now see that even our replacements for religion, capitalism and libertarianism, are dubious and damaging myths. Yet with their demise, our sense of the emptiness left by the absence of real faith merely intensifies. Tim Stacey's modest proposal is that we try to link some renewed sense of transcendence to local practices of mutual support, respecting human dignity and the natural world. It is not a bad starting-place for renewal.'

Research Professor of Religion, Politics and Ethics and President of the Centre of Theology and Philosophy, University of Nottingham, UK

'This is an important book that I enjoyed reading. It drew me into thinking about how we might build on the arguments and ideas that Stacey develops. The need for new forms of solidarity in the context of increasingly diverse societies will only become more pressing as climate change drives new waves of migration and rapid social change.'