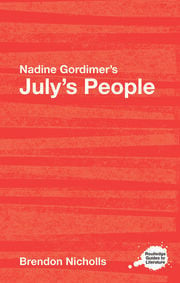 Nadine Gordimer is one of the most important writers to emerge in the twentieth century. Her anti-Apartheid novel July's People (1981) is a powerful example of resistance writing and continues even now to unsettle easy assumptions about issues of power, race, gender and identity.

Part of the Routledge Guides to Literature series, this volume is essential reading for all those beginning detailed study of July's People and seeking not only a guide to the novel, but a way through the wealth of contextual and critical material that surrounds Gordimer's text.

Brendon Nicholls is Lecturer in Postcolonial and African Literatures in the School of English, University of Leeds. He is author of Ngugi wa Thiong’o, Gender, and the Ethics of Postcolonial Reading (2010).