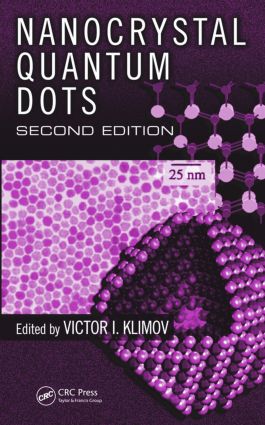 Edited by Victor I. Klimov

A review of recent advancements in colloidal nanocrystals and quantum-confined nanostructures, Nanocrystal Quantum Dots is the second edition of Semiconductor and Metal Nanocrystals: Synthesis and Electronic and Optical Properties, originally published in 2003. This new title reflects the book’s altered focus on semiconductor nanocrystals.

Gathering contributions from leading researchers, this book contains new chapters on carrier multiplication (generation of multiexcitons by single photons), doping of semiconductor nanocrystals, and applications of nanocrystals in biology. Other updates include:

The book also includes a review of recent progress made in biological applications of colloidal nanocrystals, as well as a comparative analysis of the advantages and limitations of techniques for preparing biocompatible quantum dots. The authors summarize the latest developments in the synthesis and understanding of magnetically doped semiconductor nanocrystals, and they present a detailed discussion of issues related to the synthesis, magneto-optics, and photoluminescence of doped colloidal nanocrystals as well. A valuable addition to the pantheon of literature in the field of nanoscience, this book presents pioneering research from experts whose work has led to the numerous advances of the past several years.