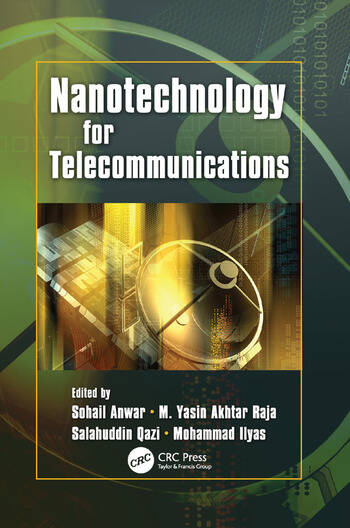 With its unique promise to revolutionize science, engineering, technology, and other fields, nanotechnology continues to profoundly impact associated materials, components, and systems, particularly those used in telecommunications. These developments are leading to easier convergence of related technologies, massive storage data, compact storage devices, and higher-performance computing. Nanotechnology for Telecommunications presents vital technical scientific information to help readers grasp issues and challenges associated with nanoscale telecommunication system development and commercialization—and then avail themselves of the many opportunities to be gleaned.

This book provides technical information and research ideas regarding the use of nanotechnology in telecommunications and information processing, reflecting the continuing trend toward the use of optoelectronics. Nanotech will eventually lead to a technology cluster that offers a complete range of functionalities for systems used in domains including information, energy, construction, environmental, and biomedical. Describing current and future developments that hold promise for significant innovations in telecommunications, this book is organized to provide a progressive understanding of topics including:

The scale of the physical systems that use nanoscale electronic devices is still large, and that presents serious challenges to the establishment of interconnections between nanoscale devices and the outside world. Also addressing consequent social implications of nanotech, this book reviews a broad range of the nano concepts and their influence on every aspect of telecommunications. It describes the different levels of interconnections in systems and details the standardized assembly process for a broad specrum of micro-, nano-, bio-, fiber-optic, and optoelectronic components and functions. This book is a powerful tool for understanding how to harness the power of nanotech through integration of materials, processes, devices, and applications.

An Overview of Nanotechnology and Nanoscience, Ahmed S. Khan

Nanotubes and Their Applications in Telecommunications, M. Shibli

An Architectural Perspective on Digital Quantum Switching, I. Tsai and S. Kuo

Dr. Anwar is currently serving as the chair of the Electronics Engineering Technology Consulting Faculty Committee of Excelsior College, Albany, New York. Since 1996, he has been serving as a visiting professor of electrical engineering at the Université d’Artois, Artois, France. He has also been serving as an invited professor of electrical engineering at the Shanghai Normal University, China, since 2009. He has been developing active research collaborations with his colleagues in China.

Dr. Anwar is the series editor for the Nanotechnology and Energy Series currently being developed by Taylor & Francis Group/CRC Press. Moreover, he is writing a textbook titled Renewable Energy Systems to be published by Taylor & Francis Group/CRC Press in late 2010. He is also the author of three guide books on renewable energy, solar energy, and biofuels.

Dr. Anwar has been teaching academic courses in the topical areas of digital systems design, microprocessors, circuit analysis, engineering design, signals and systems, quality control, programmable logic controllers (PLCs), and nanotechnology. In addition, he developed and conducted industrial training in the topical areas of PLCs, hydraulics, electrohydraulics, electrical machines, pneumatics, and electromechanical circuits. He has extensive experience in developing and teaching online courses in engineering and engineering technology. Dr. Anwar is a senior member of IEEE and a member of the American Society for Engineering Education (ASEE); the Association of Technology, Management, and Applied Engineering (ATMAE); and the Pennsylvania Academy of Science.

Salahuddin Qazi received his PhD in electrical engineering from the University of Technology, Loughborough, England, and his BS in electronic engineering from the University College of Wales, Bangor, United Kingdom. He is currently a full professor in the School of Information Systems and Engineering Technology at the State University of New York Institute of Technology, Utica, New York. Dr. Qazi has been a chair and coordinator of several programs including electrical engineering technology, photonics, and graduate programs in advanced technology, which he helped to develop. He has worked, conducted research, and taught in the United Kingdom and the Middle East before coming to the United States.

Dr. Qazi won several research awards and grants to conduct research and has published several articles and book chapters in the area of fiber-doped amplifiers, wireless security, optical wireless communications, and microelectromechanial system (MEMS)–based wireless and optical communications. He is currently working on a National Science Foundation (NSF) project to develop an instructional laboratory for the ‘‘Visualization and Manipulation of Nanoscale Components.’’ Dr. Qazi has participated as an invited speaker and presenter in several international conferences and workshops.

He was a CO-PI for a U.S.–Pakistan conference on ‘‘High Capacity Optical Networking and Enabling Technology,’’ for 2004 and 2005, which was jointly supported by the NSF of the United States and the Higher Education Commission of Pakistan. Dr. Qazi is a recipient of several professional awards including the William Goddel award for research creativity at SUNYIT, and engineering professionalism and outstanding professional development by Mohawk Valley Engineering Executive Committee. He was also awarded several IEEE awards for outstanding support and service to the SUNYIT student chapter and forging closer relations with the IEEE Mohawk Valley section. Dr. Qazi is a senior member of IEEE and a member of the American Society of Engineering Education. He has been a member of the board of directors of Mohawk Valley Resource Center for Refugees for over 10 years.

Dr. M. Yasin Akhtar Raja is a professor of physics and optical science at the University of North Carolina (UNC), Charlotte, North Carolina. He joined UNC Charlotte in 1990 and has served since then in various faculty positions with a pioneering role in developing interdisciplinary new degree programs; he has also participated in establishing new academic units and research centers. During the past decade, he served as a founding member of the task force, and program and steering committees of PhD in electrical and computer engineering, biomedical sciences, and optical science and engineering.

He also served on the planning and steering committee for establishing the College of Information Technology (now College of Computing and Informatics) at UNC Charlotte (www.uncc.edu). In his home department, he played a leading role in establishing a new graduate degree (MS) in applied physics and optics. He also served as a graduate program director in applied physics and optics program for two years. During this period, he led the pioneering work for establishing the new PhD and the optics center (http://opticscenter.uncc.edu). He is the founding member of the Center for Optoelectronics and Optical Communications, and interdisciplinary graduate programs (PhD and MS) in optical science and engineering. Professor Raja has served and chaired high-level statuary and search committees. For example, he served five years as a member of the University Faculty Council; he chaired and served on committees for hiring center directors as well as department chairs and professors.

In the research area, he leads optical communication labs and coordinates the optical networks testbed initiative at UNC Charlotte. His research expertise and interests include the design, integration, and characterization of photonic components and novel nanophotonic devices (e.g., vertical cavity surface-emitting lasers [VCSELs] and LEDs) for optical communication and signal processing. Professor Raja has developed various new courses in optical communication and networks as well as in the field of nanophotonics; these courses serve optical science and engineering PhD and MS students in several colleges and departments. He is currently engaged in network design; simulations; testbed and experimental implementations, especially network topologies; challenges in optical layer; and passive optical networks for broadband access. He has several patents and has over 150 published articles in journals and conference proceedings to his credit. He has a wide range of collaborators from national and international academic as well as industrial institutions.

Dr. Raja received his PhD in 1988 in the area of optical physics/optoelectronics from the University of New Mexico (UNM), Albuquerque, New Mexico, where he coinvented RPG lasers and conducted a pioneering research (as a coinventor) on a special type of semiconductor lasers ‘‘VCSELs’’ at the Center for High Tech Materials (CHTM) (www.chtm.unm.edu). He also contributed in developing the high-tech laser research labs at CHTM, which was then a newly established center at UNM. He has organized six major international conferences (as general chair) sponsored by NSF (http://honet-ict.org) and IEEE ComSoc, and has served on several national and regional symposia technical committees and NSF panels. Dr. Raja is a senior member of IEEE and ComSoc (serving as chair in greater Charlotte region); he is also a member of SPIE, OSA, and FTTH Council (www.ftthcouncil.org).

Mohammad Ilyas is the associate dean for research and industry relation and professor of computer science and engineering in the College of Engineering and Computer Science at Florida Atlantic University, Boca Raton, USA. He is also serving as interim chair of the Department of Mechanical and Ocean Engineering. He received his BSc in electrical engineering from the University of Engineering and Technology, Lahore, Pakistan, in 1976. From March 1977 to September 1978, he worked for the Water and Power Development Authority, Pakistan. In 1978, he was awarded a scholarship for his graduate studies and he completed his MS in electrical and electronic engineering in June 1980 at Shiraz University, Shiraz, Iran. In September 1980, he joined the doctoral program at Queen’s University in Kingston, Ontario, Canada. He completed his PhD in 1983. His doctoral research was about switching and flow control techniques in computer communication networks. Since September 1983, he has been with the College of Engineering and Computer Science at Florida Atlantic University. From 1994 to 2000, he was chair of the Department of Computer Science and Engineering. From July 2004 to September 2005, he served as interim associate vice president for research and graduate studies.

During the 1993–1994 academic year, he was on his sabbatical leave with the Department of Computer Engineering, King Saud University, Riyadh, Saudi Arabia. Dr. Ilyas has conducted successful research in various areas including traffic management and congestion control in broadband/high-speed communication networks, traffic characterization, wireless  communication networks, performance modeling, and simulation. He has published 1 book, 16 handbooks, and over 160 research articles. He has supervised 11 PhD dissertations and more than 38 MS theses to completion. He has been a consultant to several national and international organizations. Dr. Ilyas is an active participant in several IEEE technical committees and activities. He is also a senior member of IEEE and a member of ASEE.