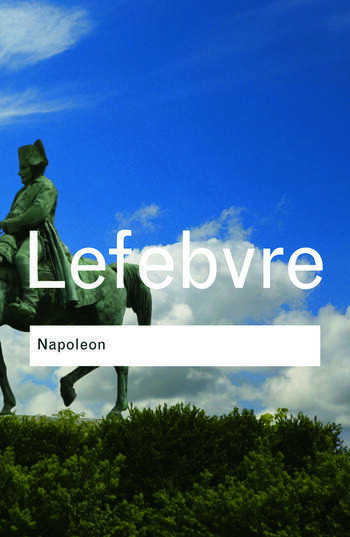 With a new introduction by Andrew Roberts.

'A penetrating interpretation...No one with a serious interest in the Napoleonic period can afford to ignore it. ' - Times Literary Supplement

Whether viewed as an inspired leader or obsessed tyrant, Napoleon has divided opinion for over 200 years. Few individuals have left such a mark on history. Georges Lefebvre's classic work, published in Routledge Classics in one paperback volume in English for the first time, is a definitive portrait of the Napoleonic era.

Lefebvre’s history sweeps us from the lightning coup d’état of 18 Brumaire in 1799 to his final downfall amidst the wheatfields of Waterloo. More than a biography, it is a brilliant survey of the turbulent age Napoleon inaugurated in his attempt to redraw the map of Europe, from the Peninsular War to the invasion of Russia. The cast includes his antagonists – Pitt the Younger, Wellington, Metternich and Tsar Alexander – and his allies – the wily Minister of Police Fouché and Talleyrand, the ‘Prince of Diplomats’. Lefebvre’s account is equally clear-eyed about Napoleon’s genius and his flaws. Napoleon’s determination to emulate Caesar and Augustus condemned Europe to more than a decade of war and economic crisis, but he also built an empire, introducing educational, administrative and financial initiatives that are still in place today.

'Magisterial...a biography that is almost as much a personal adventure story as an intellectual treatise.' - Andrew Roberts

'A penetrating interpretation...No one with a serious interest in the Napoleonic period can afford to ignore it. ' - Times Literary Supplement