Nasser's Peace
Egypt’s Response to the 1967 War with Israel 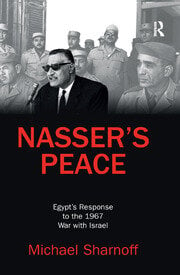 Nasser's Peace: Egypt’s Response to the 1967 War with Israel

Gamal Abdel Nasser was arguably one of the most influential Arab leaders in history. As President of Egypt from 1956 to 1970, he could have achieved a peace agreement with Israel, yet he preferred to maintain his unique leadership role by affirming pan-Arab nationalism and championing the liberation of Palestine, a common euphemism for the destruction of Israel.

In that era of Cold War politics, Nasser brilliantly played Moscow, Washington, and the United Nations to maximize his bargaining position and sustain his rule without compromising his core beliefs of Arab unity and solidarity. Surprisingly, little analysis is found regarding Nasser’s public and private perspectives on peace in the weeks and months immediately after the 1967 War. Nasser’s Peace is a close examination of how a developing country can rival world powers and how fluid the definition of “peace” can be.

Drawing on recently declassified primary sources, Michael Sharnoff thoroughly inspects Nasser’s post-war strategy, which he claims was a four-tiered diplomatic and media effort consisting of his public declarations, his private diplomatic consultations, the Egyptian media’s propaganda machine, and Egyptian diplomatic efforts. Sharnoff reveals that Nasser manipulated each tier masterfully, providing the answers they desired to hear, rather than stating the truth: that he wished to maintain control of his dictatorship and of his foothold in the Arab world.

4. Clandestine Meetings at the United Nations

"Though Nasser has been amply studied, his reaction to the aftermath of his defeat by Israel has not been analyzed with the full care it deserves. In his timely new book, Sharnoff draws on recently declassified information from Soviet and American archives, revealing new details about diplomatic exchanges at the highest levels..."

Juliana Geran Pilon, Ph.D., is a Senior Fellow at The Alexander Hamilton Institute for the Study of Western Civilization

"[This is a] brilliant examination of the twilight years of Egyptian President Gamal Abdel Nasser, arguably the foremost Arab leader in the 20th century, as he strove to recover from the crushing defeat of the June 1967 War and the attendant collapse of his tireless struggle to unify the ‘Arab Nation’ under his leadership. [Nasser’s Peace is a] must read for anyone seeking to understand the endemic volatility of the Arab world and its failure to come to terms with modernity."

"Nasser’s Peace is an important and well-written book which takes us back to the days when Egypt’s capital Cairo was the center of events in the Middle East and when Egyptian President Gamal Abdel Nasser managed to rally masses around his pan-Arab ideology, becoming the most popular Arab leader of his time, able to dictate the course of events in the entire region....It is a must read for anyone wishing to understand Egypt’s road from war (June 1967) to war (October 1973) to the peace agreement with Israel."

"This deeply informed and highly informative work deals with some of the most crucial years in the history of the modern Middle East. By examining the 1967 Arab-Israeli (Six Day) War and the seminal period that followed from the perspective of Egypt and its long-time leader, the complicated and contradictory champion of pan-Arabism, Gamal Abdel Nasser, Michael Sharnoff has provided us with a work that is scholarly and reader-friendly in equal measure, and which makes a valuable contribution to the literature on Nasser, Egypt, and the Arab-Israeli conflict."

"In his commendable new book, Michael Sharnoff examines Nasser’s last years in power, offering a critical portrait of the champion of Arabism..."

"The author concludes his study by drawing attention to the fact that at that time, Nasser possessed greater legitimacy than any other Arab leader, and had the authority to unilaterally make whatever concessions he deemed necessary in order to secure a political agreement. He explains that Nasser remained fearful of losing his leadership role."