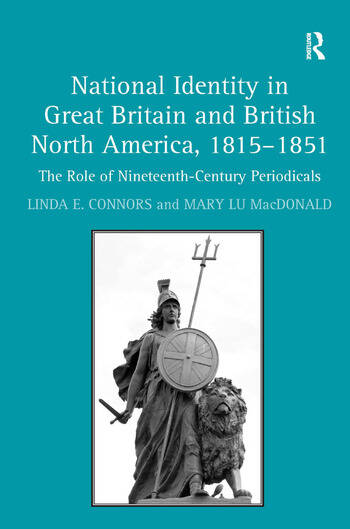 Examining the complex and rapidly expanding world of print culture and reading in the nineteenth century, Linda E. Connors and Mary Lu MacDonald show how periodicals in the United Kingdom and British North America shaped and promoted ideals about national identity. In the wake of the Napoleonic wars, periodicals instilled in readers an awareness of cultures, places and ways of living outside their own experience, while also proffering messages about what it meant to be British. The authors cast a wide net, showing the importance of periodicals for understanding political and economic life, faith and religion, the world of women and children, the idea of progress as a transcendent ideology, and the relationships between the parts (for example, Scotland or Nova Scotia) and the whole (Great Britain). Analyzing the British identity of expatriate nineteenth-century Britons in North America alongside their counterparts in Great Britain enables insights into whether residents were encouraged to identify themselves by country of residence, by country of birth, or by their newly acquired understanding of a broader whole. Enhanced by a succinct and informative catalogue of data, including editorship and price, about the periodicals analyzed, this study provides a striking history of the era and brings clarity to the perception of British transcendence and progress that emerged with such force and appeal after 1815.

Linda E. Connors is Senior Librarian for Collections, Emerita, at Drew University, Madison, NJ. Her research and writing have centered on the early nineteenth-century periodical press in Great Britain. Mary Lu MacDonald is an independent scholar, resident in Halifax, Nova Scotia, who has written extensively on the print culture of early nineteenth-century Canada.

"This is an interesting and very useful study of British and colonial Canadian periodicals in the period 1815-1851. Though periodicals flourished during these years and often had wide readerships, they have been seldom studied in detail. In dealing with the results of their research, the co-authors wisely focus on an important theme - the subject of national identity (or identities) as the concept applies to both Britain and its North American colonies. Astutely, they make their focus an era of great formative importance: the first half of the nineteenth century beginning with the conclusion of the Napoleonic Wars."

- Michael Peterman, Canada, and author of Sisters in Two Worlds: A Visual Biography of Susanna Moodie and Catharine Parr Traill

"National Identity in Great Britain and British North America structures its comparative study of nineteenth-century identity messages around five themes, each of which has its dedicated chapter: politics and economics, religion, women and children, the idea of progress, and imperial relations. It has a comprehensive bibliography and an especially useful appendix that provides descriptions of the periodicals on which the research was based."

"The study is a valuable one, not least in terms of the foregrounding of periodicals in the debate about the development of national identities..."

"... an excellent contribution to the study of transatlantic British society. National identities existed, Connors and MacDonald observe, and the book’s organization allows them to explore this succinctly and clearly. ...Their extensive knowledge and lucid analysis of British print culture (a helpful appendix of periodical information is included) will be a benefit to historians and literary scholars alike."